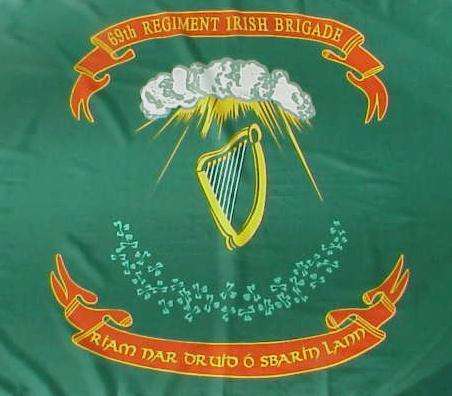 It was less than 100 years ago that “No Irish Need Apply” signs were in job windows.  Today, the Irish are thoroughly assimilated into the mainstream of American culture and St. Patrick’s day is a great day to remember the contributions of Irish-Americans to the U.S.  Anyone who knows me knows that two things I care about immensely are immigration and the U.S. Civil War.  When those

topics come together, I am in nerd heaven.  I wrote this a few years ago on Memorial Day about the immigrant experience in the civil war and Lincoln’s use of the term “new birth of freedom” in his Gettysburg address:

It is possible that Lincoln’s “new birth of freedom” was not limited to those who suffered “bondsman’s two and a half centuries of  unrequited toil,” enslaved in the U.S., but also included those immigrant groups that became American on the the battlefields of Gettysburg, Pennsylvania, Sharpsburg, Maryland and Chancellorsville, Virginia.  For example, the “Irish Brigade” of the Army of the Potomac was formed from the Irish ghettos of New York City.  Many of the leaders of the Irish Brigade were recent immigrants who fled persecution from the British Empire while fighting for self-determination in Ireland.  Colonel, Thomas Meagher, was an amazing individual.  An Irish Republican, he was tried by the crown for sedition and sentenced to exile in Australia.  He escaped from Australia and made his way to New York, where he became a prominent figure in the New York Irish community.  When shots were fired at Fort Sumter, Meagher raised a regiment that joined the Army.  Its most notable success came in the Battle of Antietam, where it pierced Robert E. Lee’s line at the Bloody Lane at a cost of 60% casualties.  The Irish Brigade also suffered grievously at the Battle of Fredericksburg, two months after Antietam.  After the war, Meagher became the governor of the Montana territory.  Meagher’s story is a truly American story- an exile who comes to the U.S. in search of freedom, embraces its values and becomes a leading figure. Such a rise was impossible in the Old World and vividly illustrates Lincoln’s “new birth of freedom” nearly as much as the Emancipation Proclamation does.

As I was planning on recycling this post without comment, I saw a good reminder how successfully integrated certain members of the Irish-American community became, they also joined in that timeless human pastime of excluding the other.  My friend Paul O’Dwyer reminded us all of the struggle to welcome GLBT Irish-Americans into the New York and Boston St. Patrick’s day parades.  Paul wrote:

It took 26 years for us LGBT people to be allowed – allowed! – participate in the St. Patrick’s Day Parade. Bittersweet, given how long it took, and that this gaudy nationalistic parade, something I never wanted much to do with in the first place, ended up overshadowing some years of my life.

It’s hard for me not to compare the violence at some recent Trump rallies with what we endured those first two years of trying to march, in NY and in Boston, and their aftermath.  I remember ILGO (Irish Lesbian and Gay Organization) members being harassed and threatened on planes to Ireland, and me being physically scared, for the first time in my life, at certain Irish-American venues here. Thankfully for us that’s in the past, but I am recently reminded of how short a distance that past is, not just for me but for others.

So if there’s a St Patrick’s Day message , it should be that these bigoted incitements to violence, whether from Donald Trump or elsewhere, need to be relentlessly pointed out, called out, challenged, protested, resisted, fought against, criticized, debunked, whatever; that we’ll stand up silently or loudly against them but at least we’ll stand up against them; and that voice of protest, more than anything else, is today’s civic duty.