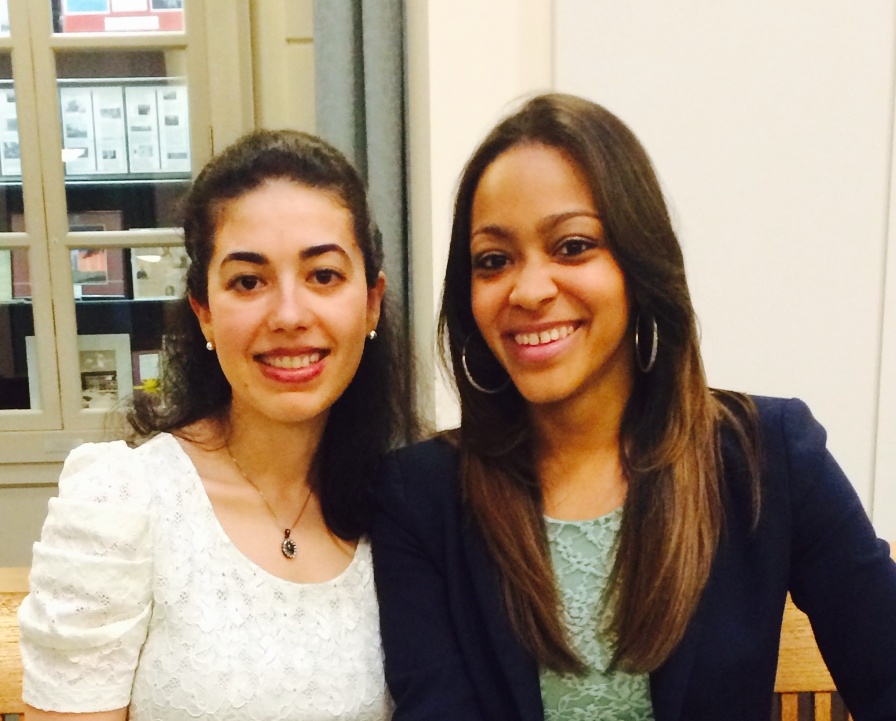 Our work with Joe* started with a bang. Our Immigration Litigation Clinic had just begun when we were assigned his case and told that he had a master calendar hearing scheduled within a few days. With the help of our supervising professors, Dree Collopy and Michelle Mendez, we rushed to prepare for our first court appearance. Although we were nervous for our first court appearance, which we did not anticipate would happen so soon after our first meeting with Joe, our nerves were overshadowed by the urgency of his case. Joe found his way to Catholic Charities after an Immigration Judge had given him one final chance to find legal counsel. Since immigration removal proceedings are civil as opposed to criminal, Joe did not have access to government appointment counsel, and therefore, needed to find a pro bono attorney on his own. It was meant to be; Joe’s need was met with our desire to represent an indigent individual before the U.S. Immigration Courts. From September through April, we developed and prepared Joe’s case.

Our first court appearance went smoothly given the short time we had to prepare. While it was a quick master calendar hearing, it gave us an opportunity to get to know our judge, and to become accustomed to interacting with DHS counsel. As we were the first team in our clinic to appear in court, we were excited to recount to our classmates our experiences and tell them what we had learned. We enthusiastically provide our classmates tips, just as we benefited from their courtroom tips as their own cases progressed. While we did not know much about Joe at the time of the master calendar hearing, it was clear that he needed us. After the whirlwind of the first hearing settled, we buckled down and began meeting with Joe more. We learned about him in small increments. Joe’s story began as a young car mechanic in Sierra Leone. He explained to us that he, his wife, and three young children escaped the war-torn country of Sierra Leone in the late 90’s when Joe’s aunt assisted him in applying to come to the United States. Getting Joe’s paperwork together, however, was fraught with dangers. Because the U.S. embassy in Sierra Leone had been evacuated as a result of the dangerous conditions, Joe would have to travel through a war zone to neighboring Guinea and stay in a U.N. refugee camp for a full year in order to process his diversity visa paperwork. Throughout this time, Joe lost many family members at the hands of the “rebels” who killed indiscriminately.

Learning about Joe’s Tragic Past

After narrowly escaping death, Joe was finally able to bring his family to the United States. Although Joe was now in a safe country where his life was significantly better and where he went on to have three more children, he would often think about the brutality he witnessed in Sierra Leone, which to this day, weighs heavily on his mind. As time went on, Joe had a couple of run-ins with the law, but paid his fines and learned his lesson. Although Joe was a permanent resident, one of his run-ins with the law resulted in a misdemeanor conviction and was the type that could prompt the Department of Homeland Security to try to deport him. That day came ten long years after his conviction and after his fines were paid, despite the fact that he had kept a clean criminal record since then. Being placed in removal proceedings before the Immigration Court so long after his conviction took Joe by surprise and it could not have come at a worse time, as Joe was struggling to find employment.

Upon reviewing the facts and the law, along with our professors, we decided that Joe qualified for Lawful Permanent Resident (LPR) Cancellation of Removal. We began learning the law of LPR Cancellation, and found out that the issues on Joe’s record did not disqualify him from this type of relief. However, while Joe qualified statutorily, discretion would weigh heavily to determine whether he would be granted LPR Cancellation. In our quest to construct a complete picture of Joe’s life and to prepare a court filing that would meet our burden of proof, we quickly learned that gathering information and preparing his evidence would require herculean efforts because Joe did not possess many of the documents we needed. In addition, his living situation was unstable, and therefore he was unable to maintain organized records.

While gathering documentation from such a vulnerable client was tough, nothing could have prepared us for what we heard on the line one cold January morning, a few days after school was back in session following our holiday break. Joe’s voice quivered over the phone as he said, “My wife just passed away.” Joe’s wife tragically passed away in the hospital after a long bout with breast cancer. We were in shock, especially because we had just communicated with Joe’s wife a few weeks ago as she happily recounted that she had just become a naturalized U.S. citizen, and then expressed her concern about Joe being in removal proceedings. Our worry for Joe grew as a flood of traumatic memories surrounding death and loss overwhelmed him. While we gave Joe space to grieve, we knew now, more than ever, that our mission to keep him here for the benefit of his U.S. citizen children was vital.

Preparing for the Individual Hearing

The race to collect documentation continued as our filing date in April was fast approaching. But, throughout the daily tasks of gathering information, we also had many memorable moments during the course of our representation of Joe. Perhaps the most solemn memory of our many long hours of meetings with him included the time when we read him the final draft of his affidavit, which we had worked tirelessly on to make sure it was an accurate representation of his life and voice. He sat and silently listened to his own story recounted to him, his head slightly bent. As we finished, reading the last sentence to him aloud, a stream of tears flowed silently from his somber eyes. Joe’s story was heartbreaking and we had to be the best and strongest possible advocates for him.

Joe’s application slowly came together with the help of his friends from church and his family. We sought their assistance in many ways, from being witnesses to arranging rides so that Joe could meet with us at Catholic Charities. Meeting with him was tough as Joe had found a job that required him to work throughout the night, meaning that he needed to rest during normal business hours. Joe would often come to our meetings restless, no doubt because of the fatigue, but also because he was anxious about his fast approaching case. The lack of sleep and the loss of his wife were too much for Joe to handle on some days. Joe’s strong faith in God and his love for his children were the anchors that he clung to during his darkest moments. And yet throughout the tumult of his days, Joe would periodically call us simply to say thank you, and to say that he would pray for us. Little did he know these small glimmers of hope he held in his heart would carry us to the end.

Our professors arranged a time in which we would be able to practice in a moot with a guest Judge and DHS attorney. Our classmates played the roles of our client and witness. The moot was the best practice we received that was as close to a real hearing as possible. We had to learn to think on our feet, to object to DHS counsel’s questioning when necessary, and, in general, pay close attention to every minute detail from our client’s demeanor, to the Judge’s reactions and commentary. While we had many practice moots with our professors, we felt especially prepared and confident after our formal moot. After all of our preparation, we knew we had a firm grasp on all the possible scenarios that could arise on our hearing date. This preparation in itself gave us confidence and helped to steady our nerves.

Our victory finally came on April 24, 2014 when the Immigration Judge in Arlington Immigration Court granted Joe LPR Cancellation of Removal. All those hours of preparation had come down to that one moment, and it was worth every last bit of effort we had exerted in those final days. We felt prepared to address both DHS counsel and the Judge, and had practiced enough with Joe so that we knew he would be comfortable on the stand. It felt invigorating to have a dialogue with the Judge, and to properly address DHS’s concerns within the direct examination of our client. In the end, the Judge thanked us for our efforts in taking the case pro-bono, thanked our professors for their guidance, and concluded that Joe was deserving of relief. 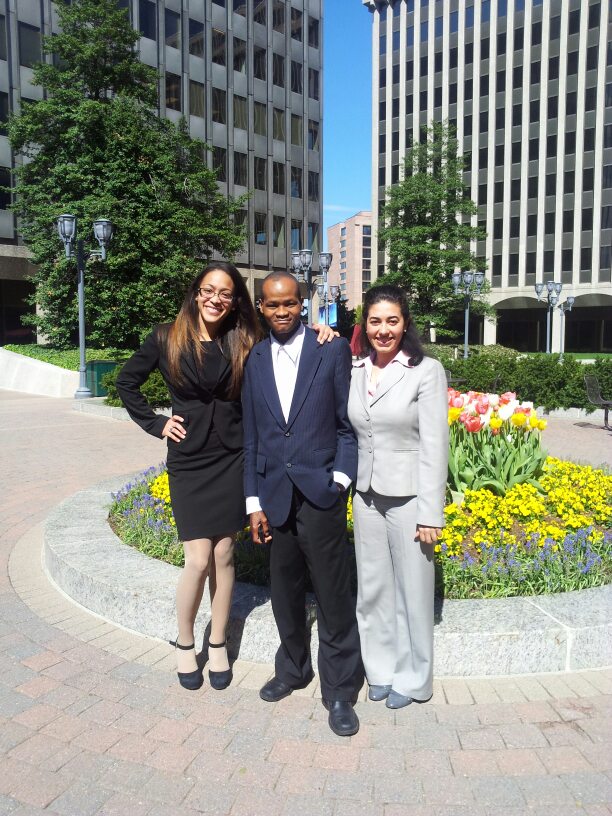 We had worked with Joe tirelessly throughout what seemed to be an emotional roller coaster. When we felt the pressure mounting, our professors’ steadfast presence around us held us upright. With the tremendous support of our classmates, we knew we would not waver. Throughout it all, the thought of Joe’s younger U.S. citizen children, ages 9, 11, and 12, who we have never met, but whose photos we carried with us, fueled our resolve to keep their father here so that they would not suffer another tragic loss. While there is more we are invested in doing to help Joe, like finding a good counseling center so that he may receive the emotional help he needs, we took a few moments to relish in our success. Outside the courtroom, smiles of relief came across all our faces. We took pictures outside of the court as mementos of our triumph, and we were thankful and extremely pleased with the outcome.

We can think of no person more deserving of a second chance than Joe. While we facilitated Joe’s journey in seeking relief from removal, we became students of his example of courage, faith, and tenacity. Joe’s devout belief in a better tomorrow, despite tremendous obstacles, will forever remain with us as a source of eternal strength.

* An alias has been used.