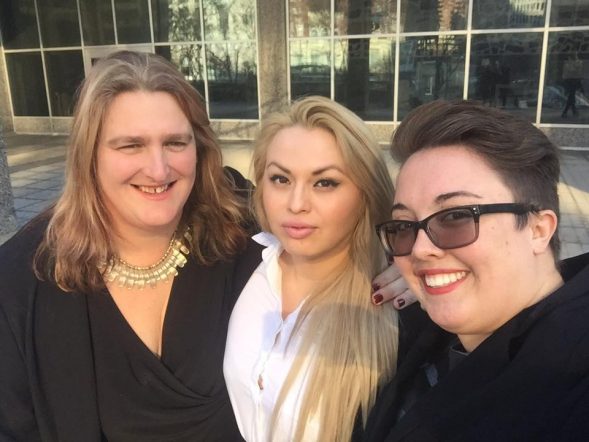 This month, we are pleased to honor Angie Salguero as our Client of the Month. Angie, a transgender woman from El Salvador, won her case for asylum last month in front of the immigration judge in Baltimore, MD.

Angie’s story of violence and persecution from a very young age included physical abuse by the police and gangs, the loss of family, a dangerous trip to the United States, and stay in immigration detention.  But more than those experiences, Angie is defined by a fierce conviction of who she is and a desire to live authentically in safety.  Despite violence and discrimination, Angie opened a business in El Salvador and became an advocate for transgender rights.  She has become a part of an active transgender community in Washington DC that helps and cares for the most vulnerable and at-risk groups among us, specifically young transgender individuals who have been forced to leave the homes.

Angie represents the best of what this country can be: a haven of security and safety for those who dream big, for those who seek to fulfill their identities and claim their dignity as human beings, for those with the ganas to risk it all for a dream they believe in.  As talk of walls and bans dominate the airwaves, Angie’s case proves that our legal system still makes room for the victimized and persecuted who still have enough fighting spirit for the journey and the challenges that immigration demands.  We are so proud to represent Angie and dozens of transgender women seeking protection from violence in their home countries.

Thanks to Sarah Pitney, Celina Marquez, Jane Vukmer and Liana Montecinos for all your hard work for Angie.