On August 5, the 2016 Olympic Games will open in Rio de Janeiro.  I love the Olympics because it is a time when we all set aside our day-to-day worries and differences to come together to cheer on the world’s elite athletes as they represent their home countries.  But I am particularly interested in watching this year’s Olympic Games because of one specific “country.”  This year, 206 countries will participate.  One of those countries is the Refugee Olympic Team.  The Refugee Olympic Team is comprised of 10 elite athletes, each of whom is a refugee who was forced to leave his/her home country.  They hail from Syria, South Sudan, Ethiopia, and the Democratic Republic of the Congo.

This year’s Olympic Games is unique in that it is the first time a participating country does not have a flag or anthem of its own, and the participating country’s Olympians are nationless.  The Refugee Olympic Team Olympians are nationless because they are refugees.  Simply put, a refugee is a person who has been forced to flee his/her home country because of persecution, war, or other violence.  A refugee is different from a migrant in that a migrant is someone who chooses to move to or resettle in another place.

The International Olympic Committee (“IOC”) created this “country” of refugees this year to give these talented athletes the opportunity to compete on the world stage despite the fact that they cannot return to their home country and cannot represent their home country.  This comes at a time when millions of individuals are fleeing war torn countries and atrocious human rights violations in Syria, Central America, Myanmar, and many other countries.  The Refugee Olympic Team comes at a time when messages of exclusion and hate pollute our media.  This comes at a time when the world needs it most.

The IOC is welcoming these Olympians “to send a message of hope for all refugees in our world.”  As IOC President Thomas Bach said, their participation “will be a symbol of hope for all the refugees in our world, and will make the world better aware of the magnitude of this crisis. It is also a signal to the international community that refugees are our fellow human beings and are an enrichment to society. These refugee athletes will show the world that despite the unimaginable tragedies that they have faced, anyone can contribute to society through their talent, skills and strength of the human spirit.”

Bach’s and the IOC’s message of love, support, and inclusion of these refugees is a message that we at Benach Collopy practice every day.  While it is heartbreaking to know that our clients have 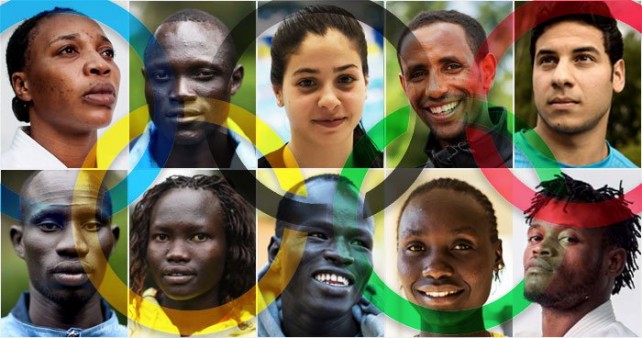 been victims of horrendous targeted violence, it brings me joy every day to know that I am helping them gain peace of mind, feel safe, and obtain protection in this country.  And it is amazing to know that talented refugees like Rami Anis of Syria, Yiech Pur Biel of South Sudan, James Nyang Chiengjiek of South Sudan, Yonas Kinde of Ethiopia, Anjaline Nada Lohalith of South Sudan, Rose Nathike Lokonyen of South Sudan, Paulo Amotun Lokoro of South Sudan, Yolande Bukasa Mabika of the Democratic Republic of the Congo, Yusra Mardini of Syria, and Popole Misenga of the Democratic Republic of the Congo will participate in this year’s Olympic games as part of the Refugee Olympic Team.  I am excited to watch the Refugee Olympic Team carry the Olympic flag as their own and march to the Olympic anthem that will be played in their honor.