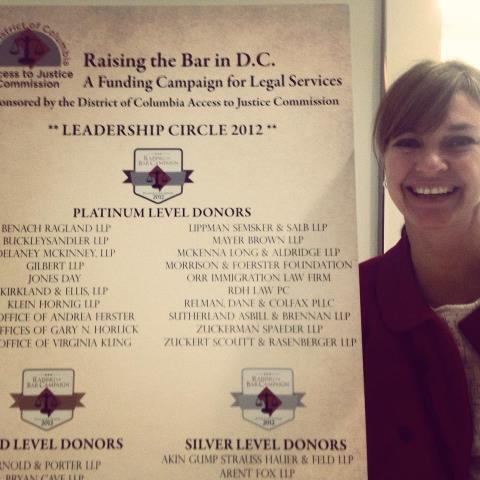 It has been a busy and exciting few weeks at Benach Collopy.  From immigration reform rallies to dramatic courtroom victories, BR has had a month to remember.

Starting off, courtroom victories are the reason we do what we do.  Three major courtroom victories this month have lifted everyone’s spirits.  First, Benach presented seven hours of testimony and 747 pages of documentary evidence to the immigration court in Pennsylvania over two days in winning a 212(h) waiver for a permanent resident convicted of an aggravated felony.  Legally, this victory was only made possible as Circuit Courts around the country, including the one in Pennsylvania, have decided that the plain language of  INA 212(h) allows certain permanent residents convicted of aggravated felonies to seek the waiver.  This was an unheard of notion about five years ago when the U.S. Circuit Court of Appeals for the Fifth Circuit in Texas decided the case of Martinez v. Mukasey that opened this door.  At the time, we told our client that his only hope was that the logic of Martinez would also be accepted in the Third Circuit, where he was facing removal proceedings.  In September, a decision called Hanif v. Attorney General did just that and we were able to put on the case.  Overcoming the aggravated felony, showing the Judge that the family would suffer extreme hardship without the husband/ father and demonstrating that our client deserved this second chance took every bit of energy and evidence we could muster.  When the Judge finally ruled, the entire family broke down in tears relieved that the threat of deportation had been eliminated. Second, Dree Collopy wrapped up a long and emotional saga when her client was granted adjustment of status without a whisper of opposition from DHS.  After years of fighting DHS on the case, Dree overwhelmed the government with evidence and reason, such that DHS agreed to her client’s adjustment.  Dree’s client, Sophie, is BR’s May 2013 Client of the Month and you can read more about her here.  Finally, Thomas Ragland was hired on Thursday, worked all weekend, and destroyed the government’s case on Tuesday.  A case that had lasted for several years where the government insisted that the client had committed fraud, when she had not, was wrapped up with a burst of activity from Thomas and Senior Paralegal Cyndy Ramirez, who with bulldog tenacity unraveled the truth of the case and set up the victory in court.  These cases represent the best of why we do what we do.  People’s lives are changed for the better and the emotional release of knowing that the immigration Sword of Damocles has been removed is a feeling every lawyer should get to know.  But, be careful, that feeling is highly addictive.

At the same time, BR served the community.  BR’s goodwill ambassadors Sandra Arboleda, Mariela Sanchez and Liana Montecinos supported the April 10 immigration rally and BR was the only law firm to attend the Maryland Council for American-Islamic Relations awards dinner on Sunday, April 28.  BR even received a shout-out from Imam Johari from the Dar-el-Hijra mosque for our work on a naturalization case for one of their congregants.  Also, last night (April 30), Benach Collopy was honored as a Platinum Member of the DC Bar’s Raising the Bar effort to support access to justice programs.  Jen Cook, who has spearheaded this effort at BR, was on hand to receive the award, which was bestowed by Georgetown Law School Dean Peter Edelman who noted that Jen was once a student of his.

Lastly, BR attorneys have criss-crossed the country educating lawyers on the challenges of immigration law.  Thomas Ragland addressed the Upper Midwest Chapter of the American Immigration Lawyers Association.  Benach went to Chicago to discuss the obligations of defense counsel in advising their foreign born clients on the immigration consequences of conviction with lawyers from the American Bar Association Section of Litigation and will speak tomorrow on Provisional Waivers and also Prosecutorial Discretion at the National Immigration Project’s annual conference in Boston.

Spring certainly has been busy and gratifying at Benach Collopy.  May looks no different with challenging cases looming.  Benach Collopy law clerk Prerna Lal will graduate from law school, marking another step towards joining BR as a lawyer after the Bar exam.  It is all exciting and we are loving every minute of it.

One thought on “Benach Collopy News”