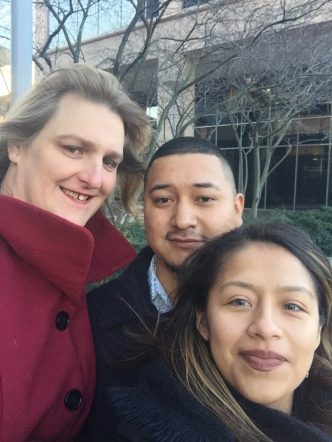 We are thrilled with our April 2018 Clients of the Month, Aldemar Segundo and Susan Matos Segundo.  Aldemar became a permanent resident in March 2018 and can live securely with his U.S. citizen wife, Susan, and their two children.  Aldemar’s improbable journey is one of the most inspiring cases we have been a part of.

When DACA was announced, Aldemar was like lots of other Central American immigrants without status in the U.S.  He came as a kid.  However, Aldemar needed to work to support himself and his family.  He dropped out of high school and worked construction.  He came to see us when DACA was announced in June 2012.  However, DACA was for kids who were in college or had graduated from high school.  Aldemar did not qualify.  So what did he do?  He made himself qualified.  Despite working a physically demanding job, Aldemar took classes at night to study for the GED.  He then passed the GED exam, qualifying for DACA.  His advanced skill level allowed him to get a promotion in his job.

There is a lot written about how DACA made so many people’s lives better: how people were able to get jobs, open bank accounts and get housing.  But this is another side.  DACA helped this young man improve his opportunities in life.  It inspired him to make a positive change in his life.  It gave him a reason to grow.  There can’t be any better endorsement of a government policy than it inspires people to make positive changes in their lives.  DACA was about protecting high achieving immigrant youth.  It had the effect of increasing that universe of eligible youth by at least one.  That’s a successful government policy.

Aldemar traveled home for the first time in several years returning on advance parole.  After he returned, he applied for residence based upon his marriage to Susan.  The couple have been together for nearly ten years, but married in 2013 and now have two kids.  We are so proud of Aldemar’s journey from undocumented high school dropout to married permanent resident father of two.  we are humbled to be a part of their journey.