If someone asked me what was the most difficult decision I have made in my lifetime, I would respond – seeking asylum in the United States. I know from personal experience that no one would leave their country of origin, their home, loved ones (often without a chance of seeing them again) and the life that they were accustomed to unless that place had become a living hell.

As the world faces an unprecedented crisis with more refugees seeking protection from persecution and violence since the World War II, it is very timely for several Senators and Members of Congress to introduce a new bill, the Refugee Protection Act of 2016, which would improve the efficiency, fairness, and effectiveness of the U.S. asylum and resettlement process, and straighten protection for refugees.

The United States offers humanitarian protection to refugees through two channels: refugee resettlement and asylum status. The process is governed by the Refugee Act of 1980 and differs in the admissions process and the agency responsible for reviewing their application. The laws, policies, and legal interpretations over the years has shattered the institution of asylum and resettlement system in the U.S., leading to the denial of asylum and other protections to victims of persecution and struggling to adapt the developing needs of refugees.

The proposed bill would resolve many problems in the U.S. refugee and asylum system, such as it would eliminate the one-year asylum deadline, prevent the prolonged detention of asylum seekers, promote due process by providing legal counsel to children and vulnerable individuals, clarify “particular social group” category, enhance the effectiveness of resettlement processing, protect innocent refugees from inappropriate exclusion, and seek to protect newly arrived refugees from slipping into poverty.

The new bill would not only improve the process of obtaining status thereby improving the lives of the refugees but also help to reduce the spending of taxpayers’ money.  As immigrant advocates know, the current one-year asylum deadline forces asylum offices out of “safety” to refer cases to immigration courts. The lengthy detentions would require more government spending on the maintenance of facilities. The backlogs in our immigration courts result in the prolonged wait of asylum seekers to attend hearings.  Such long waits leave individuals seeking protection in the state of limbo for over three years on average. As a result, the individuals seeking protection are left in a state of uncertainty, separated from family members, and feeling desperate. 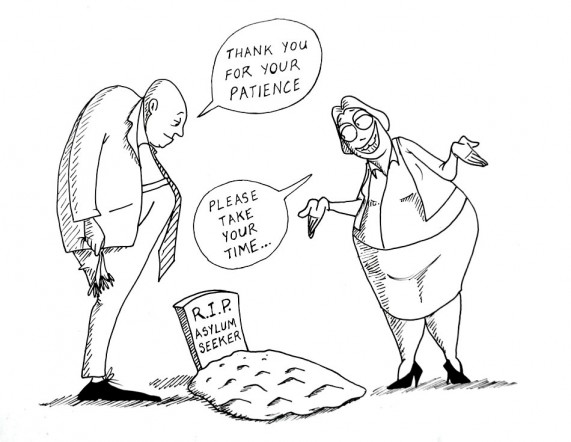 Members of Congress should follow the lead of Senator Leahy and representative Lofgren for their commitment to the America’s legacy as a haven for refugees, not joining the voices of those who are advocating we not fulfill our obligations on accepting refugees, build walls, and deport immigrants arriving at our boarders without access to due process.  We should not deprive refuge to people escaping violence whether they are escaping authoritarian regimes, fleeing from Daesh, or seeking safety from gang members. Unlike Europe, the United States has excellent vetting system, which would prevent any would be terrorist to enter the United States.

We, refugees, give back to our adoptive countries.  Refugees in the United States have been contributing to this country’s success since the day it was established. We all know about the word’s most famous scientists, writers, composers, actors, and intellectuals who were refugees in this country, such as Albert Einstein, Marlene Dietrich, Madeleine Albright, Vladimir Nabokov, Joseph Brodsky, and Miriam Makeba.  But there are millions of refugees who contribute to their adoptive country by their modest work, making it the best economy in the world.  They give back even before they can master the language of their adoptive country, its system, and stand firmly on their feet.  They are doctors and lawyers, they are house builders, cleaners and caregivers, they are waiters and chefs, they are gardeners and loan-mowers, and so much more.  They deserve the fair, efficient, and effective process of settling in the United States after all they have been through.

I want to share this story of my countryman and friend, Khassan Baiev, a refugee and a plastic surgeon, who was also the world’s martial art (sambo) champion.  He resumed his training in martial art at the age of 38 while he was struggling with a language barrier and his inability to practice medicine in the United States. As a way of giving back to the county that gave him and his family a safe harbor, he wanted to represent the United States in a sport arena. He approached Josh Henson, the president of American Sambo Association in 2002 and said, “I want to fight for the United States.” The president shook his head: “You are not a U.S. citizen.” “But I have a social security number and Massachusetts driver’s license,” Khassan said, pulling them out of his wallet. After Josh Henson consulted with the sport officials, Khassan was allowed to compete for the U.S.  He won the 2012 world championship in Shreveport, LA. He also wrote a book about his work as a surgeon in a war-torn country.

An effective and fair asylum and refugee resettlement process is as important as ever if we want to be a leader in encouraging other countries to do more as we face the global refugee crisis. The 36th President of the United States― Lyndon B. Johnson once said: “The land flourished because it was fed from so many sources–because it was nourished by so many cultures and traditions and peoples.”  Let us not forget that among those who shaped this country were refugees.  Let’s give the newly arriving refugees fleeing persecution better due process so that they have a chance to have a normal life as well as a chance to give back to this country, too.