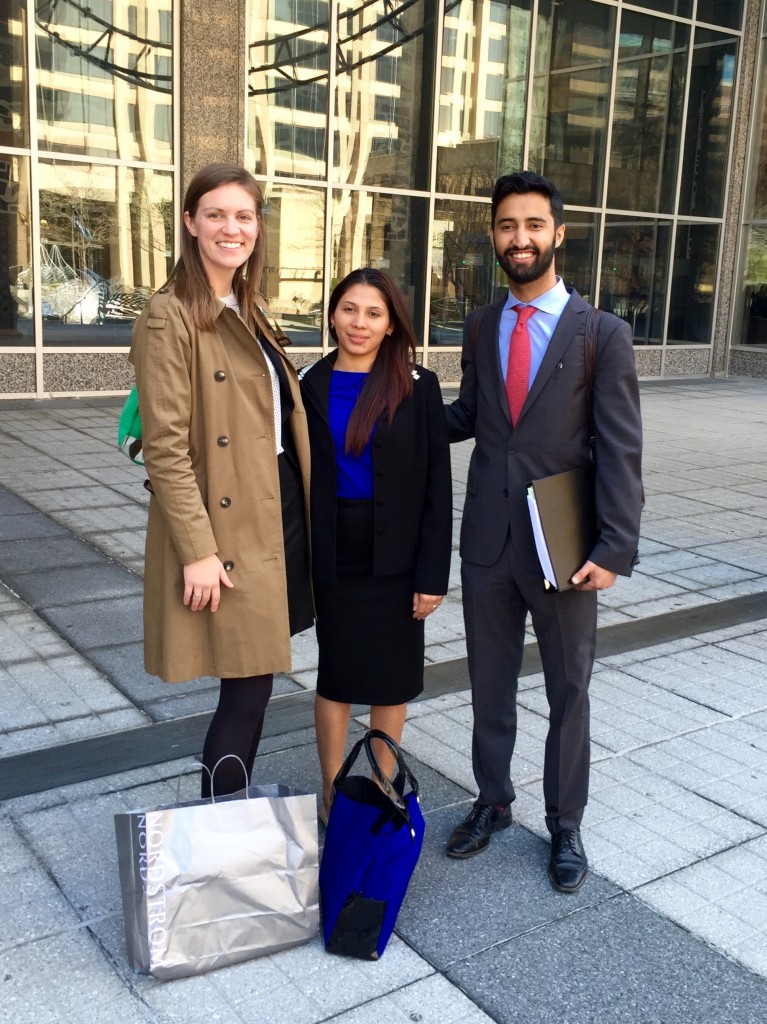 “Ok, I’d be willing to stipulate to humanitarian asylum.” We were approximately 30 minutes into the recess the Immigration Judge took, during which we were supposed to negotiate a favorable solution for our client, when DHS said the words we had been waiting to hear since we first met our client in October. We both thought, “Oh my gosh, really???” but when Professor Michelle Mendez leaned over and whispered to our client in Spanish that she was going to get asylum, we knew this was really happening—our client was going to be safe. We will never forget the squeal of happiness that our client emitted when she realized she no longer had to fear returning to a life of abuse and fear in El Salvador.

Our client, Rebekah,* and her daughter Louisa* came to the Immigration Litigation Clinic at Catholic University’s Columbus School of Law through our professor, Dree Collopy. Professor Collopy received Rebekah’s case through her work volunteering with the CARA Pro Bono Project, an organization that advocates for the rights of women and children asylum-seekers placed in family detention. Rebekah and her five-year-old came to the United States during the summer of 2014 when there was an influx of mostly women and children fleeing the violence of Central America. Rebekah’s case was unique not only because of her resilience after suffering extensive abuse throughout her life, but also because Rebekah and her daughter were one of only a handful of families detained in three different U.S. family detention centers: Karnes, Texas; Dilley, Texas; and Artesia, New Mexico. Rebekah and her daughter were detained for approximately six months in conditions lacking access to adequate food and health care. After being scammed by a disbarred lawyer who saw the detained families as easy targets, volunteer pro bono attorneys, who paved the way for the creation of the CARA Pro Bono Project, intervened and obtained Rebekah and Louisa’s release from detention on bond. Rebekah and Louisa then moved to Maryland to reunite with Louisa’s father, Jose.* Professor Collopy’s firm, Benach Collopy, accepted Rebekah’s asylum case pro bono and entrusted the clinic students to represent this special and unique client.

Before we met with Rebekah for the first time in October 2015, we reviewed the hefty case file that we had received from Benach Collopy. We read about Rebekah’s experience in El Salvador, suffering abuse from a young age at the hands of many who were supposed to protect her, and wondered what this woman would be like. How were we going to talk to her about all of these experiences? How had all of this trauma affected her?

Meeting Rebekah for the first time, we both immediately thought that she was not what we expected (not that we exactly knew what to expect). The first thing we noticed is how young she looks. How could someone this young have been through so much already? She is a beautiful and incredibly sweet woman, as well as an exceptionally loving and devoted mother. Rebekah is understandably timid and reserved, but is articulate and sharp when you get her to open up. We eventually developed a rapport with Rebekah and were able to have her open up to us about her past.

Rebekah’s suffering began as early as she can remember. Born to conservative and abusive parents in El Salvador, Rebekah experienced discipline in the form of physical punishment. She was a victim of machismo, the prevailing cultural norm that emphasizes the inferiority of women and the supreme dominance of men. Males perceive women to be their property, regardless of the female’s age or relationship to the male. Rebekah’s position in society and lack of family support made her incredibly vulnerable and open to those who prey upon women in her situation. Rebekah suffered one abuse after the other until her daughter’s life was explicitly threatened. Afraid and with no other options, this is when Rebekah made the brave decision to seek protection for her and Louisa in the United States.

Rebekah’s perseverance and resolve to escape and seek protection in the United States was awe-inspiring. Nearly everyone in her life gave up on her or abused her, and here she was putting her, and her daughter’s, life in our hands. To say that we were nervous is an understatement. This was a real person, with real tribulations that have immeasurable consequences. We have never been in this position before. All of our school work prior to this was hypothetical with no consequence, other than our personal grades. That nervousness eventually subsided when we began to prepare Rebekah’s case, because we realized that this work was not about us. It was about using the knowledge we have accumulated up to this point, as well as the expertise and guidance of our professors, to save someone’s life. The preparation for the master calendar hearing was stimulating and nerve-wracking at the same time. We had a general idea of what to expect, because we sat in on other master calendar hearings to get a feel of what we would be facing. Regretfully, however, we did not get the opportunity to watch our assigned judge conduct a master calendar hearing prior to our own master calendar hearing, and this made us somewhat nervous.

Our professors helped alleviate that feeling by going through multiple moots with us prior to our actual hearing. During those moots, we prepared for the unexpected, determined which roles we were responsible for, and had a concrete plan that gave us the confidence we needed to get through our first master calendar hearing. As is usually the case, however, the judge threw a few curveballs at us during the real hearing. The judge was aware that we were student attorneys and chose to have us go last, which was nice because we could get used to the judge’s terminology before it was our turn to represent our client. Once our time came, she asked us specific questions that were not posed to the lawyers who went before us, and quizzed our knowledge a bit more thoroughly. We managed to get through the master calendar hearing with only one set back—our individual hearing was scheduled for October 2016, but we were graduating in May 2016. We left the court room feeling both excited that we made it through our hearing, and dismayed at the fact that we may not be able to represent Rebekah in October 2016. Fortunately for us, our professors worked some magic to get the individual hearing rescheduled for April 6, 2016.

Ecstatic at the opportunity to continue to represent Rebekah, we began preparing for the individual hearing. The process was grueling, and required long hours of case research, client meetings, and guidance from our professors. We knew Rebekah was deserving of asylum, and we knew that we could get her that relief. Rebekah’s case was complex, and we formulated multiple strategies for her case. Some of the strategies had to be reworked, others were dismantled and restarted from scratch. The number of hours we spent preparing Rebekah’s case seemed endless and arduous, but there was always a light at the end of the tunnel—the thought that Rebekah and Louisa would not have to go back to El Salvador and be at the mercy of their persecutors. It was that thought that got us past the hurdles and complications that we faced during our preparation. Our petty grievances about lost sleep and immense workload was nothing compared to the pain and suffering that Rebekah experienced in El Salvador.

It is this severe past persecution that warranted Rebekah a grant of humanitarian asylum on April 6, 2016. Rebekah will now be safe, free from persecution and fear, and can live a normal life, while Louisa will be able to grow up in a place where women are by and large regarded as equals. Although deserving of asylum, DHS did not want to validate our particular social group formations in fear of “opening the floodgates” for other women in similar situations seeking asylum in the United States. The three particular social groups presented were: 1) Salvadoran women who are viewed as property by virtue of a familial relationship; 2) Young Salvadoran women who are abandoned and living alone; and 3) Former Salvadoran female sex trafficking workers. While Rebekah is a member of each of these groups and was persecuted on behalf of her membership in these groups, it was ultimately the aggregated abuse she suffered that convinced DHS to stipulate to a grant of humanitarian asylum.

Concerned with having our client testify about her past trauma, the Immigration Judge encouraged us to negotiate with DHS and took a recess for us to negotiate with DHS. The government first offered withholding of removal due to the particular social group formulations, but we knew our client was deserving of asylum. Further, in order to grant withholding, DHS would have to rely on a particular social group, which they were not willing to do for asylum, so the withholding offer contradicted the reason for not willing to stipulate to asylum. I respectfully but relentlessly pushed for humanitarian asylum highlighting in detail the severity of her past persecution and pointing DHS to the evidence we had submitted. DHS took a few minutes to re-read our expert declarations and client affidavit. This is when DHS realized that humanitarian asylum was warranted and agreed to stipulate to humanitarian asylum.

We have learned a lot throughout this process, but, most importantly, we have learned about the importance of time management. From a young age, our teachers and parents have stressed the importance of completing tasks ahead of time. I have heard it said that, “being late is the most selfish thing anyone can do.” That saying rings more true when you are representing someone in immigration court. A late filing by a lawyer can create irreparable damages to a client’s case that could result in deportation, or, at the least, negative treatment by the judge. We nearly faced this reality, because we had to ask our immigration judge for a motion to extend the filing deadline for our brief. It was one of the most shameful moments that I have experienced. The relationship that an immigrant defendant has with their lawyer in removal proceedings is tantamount to a doctor-patient relationship. Rebekah and Louisa trusted us with their lives, and we almost ruined that trust. Thankfully, Rebekah’s case turned out for the best; the immigration judge granted our motion and accepted our brief.

We want to thank everyone who assisted with our case, as every person played an invaluable role for us, from translating interviews or documents to participating in our moots to providing expert declarations on country conditions. In particular, we want to thank Carol Cleaveland, Cecilia Menjivar, Maria Rolong, and Ingrid Mazariegos.  We want to especially thank our professors Michelle Mendez and Dree Collopy for their guidance and undying devotion to the clients. We are incredibly grateful for the help you gave and could not have achieved this victory for our client without you. This has truly been a rewarding experience. We also want to thank our client, Rebekah, for her incredible strength and resilience that motivated us to obtain the best outcome we could for her and her young daughter. Lastly, we are fortunate to have had reasonable DHS counsel and a caring Immigration Judge. They laid the foundation for this just and fair outcome that has undoubtedly saved Rebekah and Luisa.

*Indicates name has been changed to protect anonymity.

One thought on “GUEST BLOG: “More Than a Grade: How our Salvadoran Asylum Client Taught us What it Takes to be an Attorney” by Abdulmajeed Alhogbani, with contributions by Barrett Bles, Recent Graduates of the CUA Columbus School of Law”