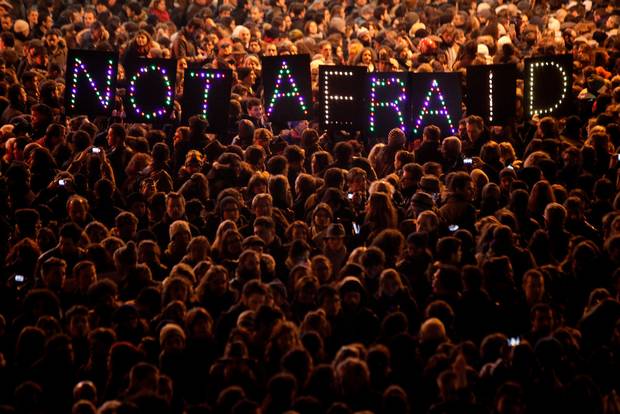 At Benach Collopy, we share the outrage over the terrorist massacre in Paris.  We weep for the families who lives where turned inside out by a murderous death cult.  As residents of another Western capital, we are all too aware that we are also a target of the missionaries of hate.  Now, in the name of protecting us, many politicians call for an end to refugee admissions.  However, what is needed right now is not an end to refugee admissions, but a commitment to admit more refugees and live up to our commitments and ideals.

The U.S. prides itself on being a haven for those seeking refuge and shelter from the wars and violence that grip too much of the world.  Yet, the numbers do not match the rhetoric.  The U.S., recently, has done an abysmal job at protecting refugees.  While the numbers of people displaced by the Syrian war are in the millions, the U.S. has admitted less than 2,000 Syrian refugees since 2012. In the same period of time, Germany, a country of about 1/4th the population of the U.S., has admitted nearly 100,000. Meanwhile, it was the U.S. that invaded Iraq and whose bombs fall in Syria.  The world sees a country that drops bombs in foreign countries and refuses to provide real assistance to the people who must live with the evil of the Daesh.  (We use the term “Daesh” for the terrorist organization that bills itself as the Islamic State.)  In addition, the U.S. houses refugee women and children fleeing tremendous violence in Central America in family prisons in Texas.  U.S. policy in this realm is limited to bombs, jails and pious lectures.

Now, the politicians are calling on the U.S. to turn off this very weak trickle of refugee admission.  And some governors are indulging in the constitutional fallacy that they could refuse to accept refugees lawfully resettled in the U.S.  For example, perpetual Presidential race bottom-dweller and Louisiana governor Bobby Jindal has stated that Louisiana will not accept refugees, despite the lack of any authority for him to make such a demand.  One must wonder if Jindal, the son of immigrants, will re-enact George Wallace in the schoolhouse door to prevent refugees from settling in Opelousas.  These politicians are selling fear.  They ask us to turn away from our responsibilities to humanity by stoking fear and ignorance about refugees.  They are the worst of us at the moment where we need to be our best.

The overwhelming majority of refugees are women and children fleeing bombs falling in their neighborhoods, terrorists destroying schools, car bombs and assassinations.  More importantly, they are fleeing the violence of Daesh and the Assad regime.  They are people whose homes wound up in a war zone.  Moreover, they are a tremendous public relations problem for the Daesh.  As Muslims flee their tyrannical rule and would rather live in the West, it undermines the legitimacy of their rule.  It is not unreasonable to believe that part of the goal of the Islamic state in the Paris attack was to fuel hatred towards the immigrant.

However, if we answer the hatred with warmth and welcome, we destroy the narrative that the Daesh wants.  We prove the world that the U.S. will stand with the oppressed and persecuted of the world against hatred and intolerance.  We prove to the world that people of all cultures and faiths can stand together against violence and death.

After the second world war, the U.S. engaged in a herculean effort to raise the shattered German and Japanese states from the ashes.  After the millions of lives taken by the citizens of those countries, the U.S. recognized that generosity and a lending hand was more effective than punishment.  By accepting refugees and helping them when they get here, providing assistance to them and watching for signs of radicalism, we can create a community of people from across the globe who know that the U.S. is willing to share the burden of those fighting and fleeing the terrorists of the world.