Benach Collopy often turns this space over to law students and other friends to discuss their cases.  Malissa Tucker and Alexandra Early are law students at the Catholic University Law School, where they are part of the immigration law clinic taught by Dree Collopy and Michelle Mendez. 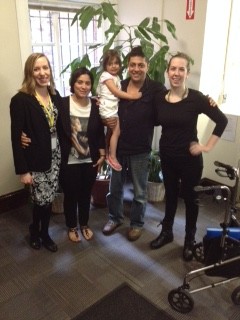 We met our client Muhammad shortly after the fall semester began. We were so nervous to meet this stranger who we knew desperately needed our help that all we could do was scribble down some extra notes about what we wanted to ask him and prepare steaming hot Styrofoam cups of mint tea – our way of saying “we are here to take care of you.” Little did we know, our relationship with Muhammad would come to revolve around these little tokens of kindness and blind faith in each other, eventually blossoming into a life-long friendship. As much as we were there to serve Muhammad, he was there to teach us what it meant to be advocates, friends, and fellow human beings.

At the first few meetings we learned of Muhammad’s tumultuous life as a dual-faith citizen of Egypt, the threats faced by his young family, and the already rocky road he had traversed while seeking protection and a new life in America. Unfortunately, Muhammad had been previously led astray by his former advocates who we felt did not fully explore his claim or educate him about America’s complex asylum framework. To make matters worse, during the first half of our academic year, Muhammad’s wife and three small children were still back in Egypt living in hiding. The pressure of knowing they remained in constant danger was grating on us, but even more tormenting for Muhammad who did not know what the future held for his family. Above all, we came to see Muhammad as a loving husband and father who only wanted the freedom for his family that he himself had never known.

About two weeks after that first meeting, we appeared at the Baltimore Immigration Court for our first Master Calendar Hearing. There, we entered our motions to appear as his student attorneys and asked for a second Master Calendar Hearing to file his asylum application. However, Muhammad had moved to Virginia prior to the hearing, threatening to relinquish the Baltimore Court’s jurisdiction over his case. We knew that if his case got transferred to the Arlington Immigration Court the clinic would not likely be able to keep working on it since their asylum docket extends several years out. After we explained Muhammad’s issues finding stable housing, the government agreed to give Muhammad time to move back to Maryland. Soon after he was able to find temporary – albeit still not affordable or stable – housing back in Maryland.

Between that hearing and our second Master Calendar Hearing, we worked feverishly to complete his asylum application, and to collect supporting documentation about the country c 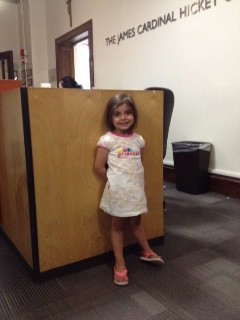 onditions in Egypt, the systemic discrimination and violence against Coptic Christians, and the threats faced by adherents to non-traditional religious, social, and political norms in that country. Meanwhile, Muhammad struggled to support himself and send money back to his family in Egypt because he did not yet have work authorization. Muhammad was a business owner in Egypt, but in America, he struggled to make ends meet making far less than minimum wage as a busboy. To him, it did not matter that he had gone from managing a business to washing dishes, as long as he and his family could still dream of being safe. We realized that many refugees and asylees face these steep integration challenges and are in need of a myriad of social services to be able to live, let alone successfully start over. To this end, we attempted to provide Muhammad with information on organizations that could help him with basic financial, medical, and social services. Still, many programs could not assist him until he was actually granted asylum. With the most humility that we had ever seen, Muhammad, half-joking often told us how one day he would make us proud and “pay us back” for our pro-bono services when he was no longer a busboy. Through Muhammad’s eyes, we came to appreciate more and more the imperfect American Dream.

We also struggled to find expert witnesses who were willing to comment on what was quickly becoming a complicated legal case. Finally, prior to the second hearing in November, we found a gracious country conditions expert and psychologist who saw our vision and agreed to help Muhammad.

Between filing for asylum in November and our merits hearing scheduled for early April, we labored to further build the case, working with Muhammad and our experts to tell his story in the most compelling and clear way possible. Not surprisingly, recounting a lifetime of abuse took its toll on Muhammad. At times, we felt ill equipped to handle the emotions that came flowing out of him – the fear, the angst, the helplessness. But with each passing meeting, we became closer as a team and more and more ready to fight for “our brother” and his family.

Even as we climbed forward, conditions were getting worse for his family in Egypt until one night, while sitting at the kitchen table, one of us got a call from Customs and Border Protection at Dulles International Airport notifying us that Muhammad’s family had fled to America and were being temporarily paroled into the United States. We were stunned and unsure of how to react. A few frantic calls to our professors later, we understood that Muhammad’s family was lucky to make it to America alive and be allowed in even temporarily. We also learned that people in Muhammad’s position have to make impossible choices on a daily basis and that as future immigration attorneys, we had to roll with the punches and never stop advocating for our clients no matter the challenges. Once we met the family, including Muhammad’s three small children, we knew that there was no going back – we had to protect them. During our meetings with them, we were often gifted small crafts that the children made from beads and pipe cleaners. To us, these became symbols of their love and resilience – even more motivation to keep fighting.

And fight we did. Before what was supposed to be our final hearing in April, we sat Muhammad down and had him watch an inspirational video about honey badgers – notorious for never giving up and never backing down. As he watched the video, Muhammad’s tear stained face broke into a grand smile. He laughed like we had never heard him laugh before, deep from his stomach. He became our honey badger that day, bristling with pride because for the first time in his life, he felt like he was taking back control and doing right by his family by continuing to seek asylum.

At the Individual Hearing on the merits, the case took an unexpected turn. Although we knew the extent of Muhammad’s past harm on account of his religion, particular social group, and political opinion, the Immigration Judge struggled to understand how Muhammad was eventually able to become moderately successful despite the past harm he had suffered. The very resilience that we had come to love about Muhammad now seemed problematic for our case, as we struggled to convince the Judge that Muhammad still had a well-founded fear of future persecution. After three hours of questioning, the hearing was continued so the Judge could further explore Muhammad’s claim. We were devastated for a moment at the thought of prolonging the family’s uncertainty, but we quickly reset and began preparing for a second Individual Hearing in May.

In the space of three weeks, we obtained more crucial evidence for the case with the help of two wonderful new experts and our professors. We used the extra time to further prepare Muhammad’s wife to testify about her experiences in Egypt. Right before the hearing, we brought Muhammad, his wife, and our spectacularly patient interpreter together to share a home made meal. We sat around the table like a family that day and we knew that things were going to be okay. Our professors had been preparing us for our final hearing all year and we had all come so far, personally and professionally. The time was ripe for more miracles. 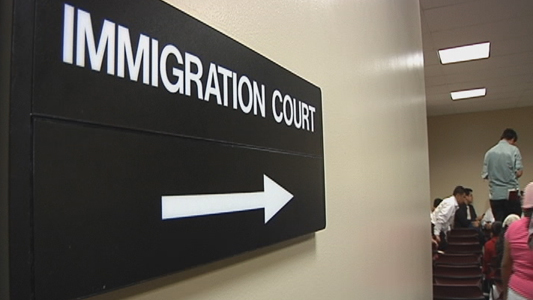 On May 7, 2015, Muhammad’s life changed forever. At the close of another grueling hearing, the Immigration Judge spoke softly into his microphone the words we had all been pining for: “I am going to grant asylum.” Muhammad understood and the tears began welling in his eyes – in all of our eyes to be fair. His wife, who did not understand English, looked at us in a panic until we slowly nodded and smiled. She told the judge, through the translator, “I will never forget your face – thank you.” We all hugged, overjoyed by the decision and the thought of Muhammad’s family finally getting the opportunity to be free, to be themselves, and to one day become American citizens.

We have never been more proud to be CUA law students than we were during the course of this case. We are humbled by the immigrant experience, the expertise, and kind guidance of our professors, and all those that we met along the way who work tirelessly for justice. Above all, we are reminded that there is a balance in the universe and that we must never stop working to highlight the gentler parts of humanity.