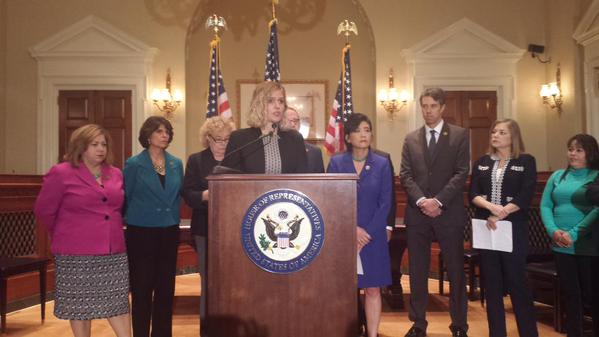 Yesterday, several prominent House Democrats called on the administration to end family detention.  Organized by Congresswoman Zoe Lofgren of California, the Democrats decried the Obama administration’s detention of women and children fleeing violence in Central America.  From the creating of a truncated form of due process in refugee protection to a novel interpretation of bond eligibility to conditions which have caused serious illnesses in the children being jailed by the administration, the entire experience of the gulag archipelago of detention centers was designed not to follow the law and protect asylum-seekers, but as a means of deterrence to other potential refugees.  Benach Collopy been in the fight against family detention since the government picked a small town three hours from any airport, Artesia, NM, to jail women and children far from attorneys or any social services.  Artesia has now been closed, but Karnes and Dilley have sprung up like weeds and the government quietly uses all means at its disposal to dissuade women and children from seeking protection in the U.S.  These women and children, however, have proven far stronger than the government anticipated, fighting their cases with a team of committed lawyers organized by the American Immigration Lawyers Association.  And they have almost uniformly won.  Our own Dree Collopy was one such lawyer who went to Artesia and won asylum for a Guatemalan mother and child.  Maria Rosa Lopez, a survivor of Karnes, spoke yesterday with the House Democrats and tearfully expressed how her son wanted to jump off a roof after being detained in Karnes.  This is the reality of family detention.

At yesterday’s event, Dree also spoke forcefully against family detention.  Her remarks are below:

My name is Dree Collopy. I am a partner of Benach Collopy here in Washington DC and a member of the American Immigration Lawyers Association.

Hundreds of AILA volunteers have stepped away from their practices to donate their time representing the mothers and children detained in the Artesia, Karnes, Dilley, and Berks secure jail-like facilities. Why? Because this is something we have never seen before as lawyers.

Yet, unlike the refugees who preceded them, they have arrived here in the United States and been thrown in jail, where they have been kept for months in inhumane conditions and where they are refused meaningful access to counsel and interpreters, witnesses and evidence, family and emotional support, mental health care, and other tools that are essential to seeking protection in any meaningful way.

As an volunteer at the facility in Artesia, NM, I witnessed dehydrated, listless, and malnourished children clinging to their mothers, while their mothers’ pleas for medical care were met with degrading and abusive treatment. I saw an indigenous woman from Guatemala overcome with relief when she was finally able to speak with an interpreter on an AILA attorney’s cell phone. She had not been able to speak to anyone for nearly two months. I listened to a woman recount being raped and beaten while her six-year-old daughter sat next to her, quietly coloring. I heard a psychologist tell me over the phone that my client was suffering from very severe PTSD and was unlikely to begin the process of healing until she is released from detention…and that her four-year-old son, who had been detained for five months, was suffering from severe depression and was at serious risk of lifelong emotional problems.

As an AILA volunteer, I have witnessed countless scenes that I wish I never had to see and that I never expected to see here in the United States. Although the facility in Artesia has now been shut down, hundreds of volunteers from my organization are seeing these same, repeating problems in the facilities at Karnes, Dilley, and Berks.

And after all that we have seen, we absolutely agree with what Representatives Lofgren, Gutierrez, and Roybal-Allard have said.

This embarrassing stain on America must end now.

The entire press conference is below.  Dree’s remarks begin at 19:43, but it is worth it to watch the entire video.

New accounts of yesterday press conference are here and here.