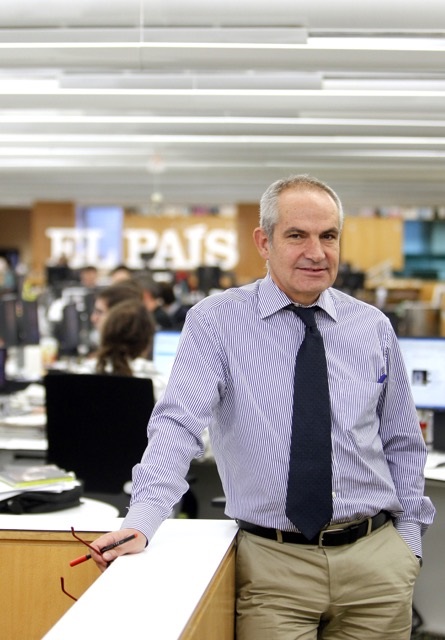 Mr. Antonio Caño Barranco—the Editor-in-Chief at EL PAIS, Spain’s leading newspaper—is our April client of the month. Mr. Caño Barranco came to Washington, D.C. in 2007 where he was stationed as U.S. Bureau Chief until he was designated as the Editor of the newspaper.

Prior to becoming Editor, Mr. Caño Barranco started his journalism career working for EFE News Agency and joined El PAIS in 1982. His original work in the field of journalism has been widely acclaimed and has brought him great distinction as he served as foreign correspondent in Mexico and Central America, then as the U.S. Bureau Chief in Washington DC. He has also served as Foreign Desk Chief, Deputy Editor in charge of the Sunday paper and magazine, and head of the Investigative Reporting and Analysis section of the newspaper. Throughout his career, Mr. Caño Barranco has covered, among other events, the Gulf, Falklands, Chad, and El Salvador wars; revolts against Pinochet in Chile; the fall of the Sandinista government in Nicaragua; and four presidential elections in the United States. Additionally, he has interviewed presidents, chiefs of State, and public figures, which include U.S. President Barack Obama. Furthermore, he launched the American edition of EL PAIS, which has become a journalistic reference in the Spanish-speaking world. Mr. Caño Barranco’s international recognition and prestige as a journalist is demonstrated by his induction into the Order of Civil Merit by Juan Carlos I, His Majesty The King of Spain, which is Spain’s highest honor and award presented to internationally renowned individuals who have made significant contributions to Spain.

Mr. Caño Barranco came to us to adjust his wife’s and his status in the United States, the homeland of his two young beautiful children and where he has formed a loving family. We assisted Mr. Caño Barranco and his wife in preparing and filing his I-140 Immigrant Petition based on his extraordinary ability in the field of journalism and their I-485 applications to adjust status to permanent residence. We are pleased to say that their permanent resident status was granted in less than two months. Mr. Caño Barranco and his wife Yolanda Monge, herself a prominent journalist, are overjoyed to be permanent residents, and we are delighted that the United States has welcomed Mr. Caño Barranco, a journalist whose devotion and high-quality, widely-acclaimed work has elevated him to the very top of his field.