The Benach Collopy crew just returned from the annual conference of the American Immigration Lawyers Association in Boston, Massachusetts.  The annual meeting is the largest gathering of immigration lawyers and provides an opportunity for lawyers to learn from each other and improve their services to their clients.  This year, Benach Collopy attorneys Dree Collopy and Benach, served on the conference faculty.  On Friday, Dree spoke on a panel that encouraged lawyers to think about issues in removal proceedings that go beyond the availability of relief entitled “Challenges and Strategies Beyond Relief.”  On Saturday morning, served as a “Star” on the “Litigating with the Stars” panel, which challenged lawyers in the audience to think through common (and uncommon) scenarios and share their strategy.  The “stars” then critiqued the answers.  It was, indeed, a pretty sharp group of lawyers, as the stars gave out lots of “9s” and “10s.”

AILA also asked to serve a third year as a member of the amicus curiae committee, the committee that decides which cases AILA will support with amicus briefs and prepares briefs on behalf of the organization.  In 2013-14, the committee submitted sixty briefs.  Dree was chosen again to serve as the Chair of the AILA asylum committee.  Thomas Ragland will continue to serve on the Federal Court Section Steering Committee.

The highlight of the conference was Saturday evening, when AILA gave its 2014 Joseph Minsky Young Lawyer Award for Outstanding Contributions in the Field of Immigration and Nationality Law.  In presenting her with this award, AILA cited Dree’s full caseload at Benach Collopy, as well as her leadership of the Catholic University Law School Immigration Clinic and her stewardship of the AILA National Asylum Committee.  Lastly, AILA noted that Dr 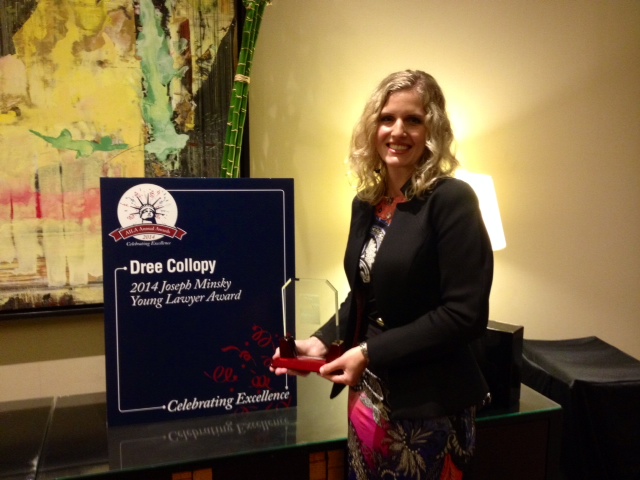 ee is writing the upcoming edition of AILA’s Asylum Primer, a practical how-to for anyone seeking to represent an asylum seeker.  AILA subsequently published Dree’s speech accepting her award on its Leadership Blog.  Dree cited the humanitarian crisis on the border, the lack of due process, and the failure of the political branches to address the serious policy issue of immigration:

We are now faced with a humanitarian crisis at our borders.  CBP and ICE officers are using excessive force, inhumane detention conditions, and “no process” removals. We are faced with immigration courts fighting against insufficient resources, overcrowded dockets and cabined legal discretion. And we are faced with a renewed assault on our asylum system by Congress and the agencies themselves.

Yet, no actions are taken by those in power to fix our system. Instead we have a Congress that points fingers and strikes a pose in Capitol Hill hearings and an Administration which, on the back of an immigration reform-focused campaign, has taken to putting Band-Aids on gashes rather than treating the underlying wounds.

Until we have leaders who are going to work together to solve real problems that affect real people, American businesses, and separated families, it is up to us. It is for these reasons that this award is only the beginning of my journey.

After the awards ceremony, BR and many FOBRs headed out for a night of dancing, before getting back to the work that we knew awaited us.