As predicted by many in the profession, the H-1B filing cap was reached today.

On one hand, this is good news because reaching the H-1B cap this early into the season is an indicator that the economy is rebounding. This has been the shortest application period to date in the past five years.

The H-1B cap is a major issue for employers looking to hire foreign workers. Due to the H-1 program’s popularity, the annual allotment of 65,000 slots is routinely filled just weeks (if not days) after USCIS begins accepting applications—leaving employers, and especially technology start-ups, unable to tap much of the pool of foreign labor on which they rely.

The I-Squared Act, a bipartisan bill that is pending in the Senate and would likely be attached to broader comprehensive immigration legislation, would create a floating cap for the H-1B as depicted by the Brookings Institute chart below: 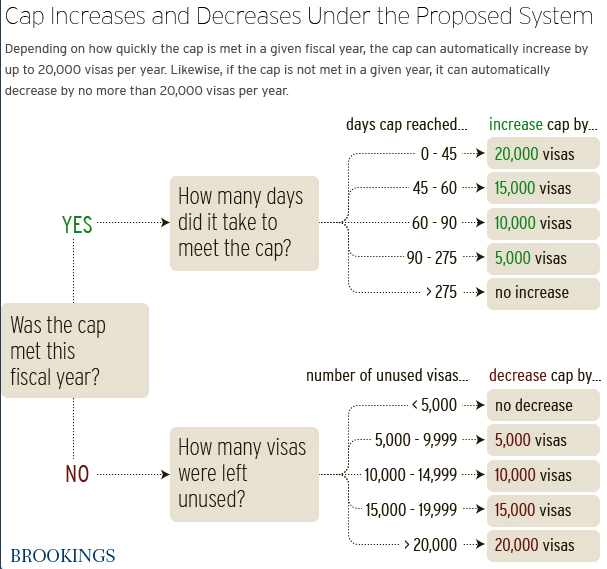 Fluctuating the cap based on economic need would be a welcome change from the current fixed cap of 65,000 for regular H-1Bs, and 20,000 additional for H-1Bs filed on behalf of advanced degree holders. We can only hope that this legislation sees the light of day.

Premium processing for cap-subject H-1B petitions will begin on April 15, 2013. The USCIS has not yet announced the date of the lottery. Stay tuned for more information.