It is very true that the immigration laws need a wholesale revision.  Congress needs to make substantial changes, regulations need to be re-written, precedent decisions scrapped and new guidance forthcoming.  But another change is needed and this change may the hardest of all.  It is a change of attitude within the agencies.  We have written in this space on multiple occasions about the hostility that elements within ICE have for their political leadership and the “culture of no” within CIS has been well-documented.  However, less reported is the blase indifference that many civil servants within the agency take toward the people affected by the way they go about their jobs.

Here is where I am supposed to say that the majority of the people who work for the immigration agencies are hard-working, well-intentioned people laboring under tremendous workloads and inadequate resources.  I am supposed to say that those who are indifferent to the human lives in the case before them are far outnumbered by the valiant majority who struggle against the bureaucratic odds to make a difference.  Sorry, but I can not say that.  I have to say that indifference is the default and care and compassion and vigor are the exception.  Such virtues do exist within the immigration agencies, but they are rarely on display.  Initiative and “going the extra mile” are snuffed out like weeds in those Round-Up commercials.  The overwhelming majority simply have little concern for the people affected by the way they do their jobs.  Immigration reform will be incomplete unless it addresses this problem as the power of clerks and administrative staff to harm the interests of immigrants remains immense.

Let’s focus on the Executive Office for Immigration Review (EOIR), the Immigration Court system.  Here are just a couple of things that have happened to us in the past few months that show how bureaucrats affect people’s lives by the way they do their jobs:

These are problems that are not going to be addressed by legislation.  They require a wholesale change in attitude and a lesson in courtesy. This is not simply a problem of
“poor customer service.” I hate the idea of customer service in a government agency. I think they owe us MORE than a business owes its customers. We are citizens, we are a polity and they are our government. They derive their authority from us. A business derives its income from us, which it can choose to accept or not. Citizen vis-a-vis government is entitled to more respect and deference than a Slurpee-buying sap at a Seven-Eleven. 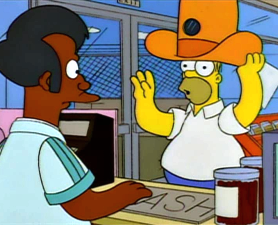 These problems require an understanding that immigration detention is a serious deprivation of liberty that must be limited in duration and for the most serious matters.  A culture must grow within the Immigration Court that anything that unnecessarily prolongs detention is to be avoided and that resources will be provided to ensure that immigrants have access to prompt hearings.  Employees of the court system must be trained to recognize that they should do all they can to ensure that detained individuals have access to process.  A person is charged with murder is put in front of a magistrate judge within 24 hours who sets bail (or not).  A person charged with overstaying a visa is often detained for weeks before he gets review of his detention.  How does that system make sense?

This post was mostly cathartic.  Future posts will explore some of the legal underpinnings of the immigration detention regime.  For example, a U.S. Supreme Court decision many years ago said that removal proceedings are civil and not criminal and many criminal procedural protections are, therefore, unavailable in removal proceedings.  Given the militarization of the border and the use of detention during removal proceedings, we wonder how much of that flawed doctrine still can stand.

One thought on “Indifference”