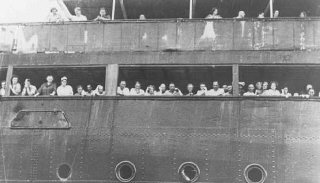 Today, on Holocaust Remembrance Day, I am thinking about the M.S. St. Louis.  In 1939, while war waged in Europe, the M.S. St. Louis, a transatlantic ship carrying Jewish refugees fleeing the Third Reich, reached U.S. waters by way of Hamburg and Havana.  Seeking protection from persecution and a safe place to start over with their families, these refugees hoped to be admitted to the United States of America.  At the time, however, the Great Depression had fueled sentiments of xenophobia, nativism, and isolationism among U.S. citizens.  As a result, instead of welcoming “your tired, your poor, your huddled masses yearning to breathe free,” as inscribed on the Statue of Liberty, the U.S. turned the M.S. St. Louis back to Europe, where at least 254 of its refugee passengers were murdered in concentration camps.

The plight of refugees during World War II, such as those passengers on the M.S. St. Louis, had a profound impact on international and U.S. asylum policies, with the world declaring: “Everyone has the right to seek and to enjoy in other countries asylum from persecution.” (See the Universal Declaration of Human Rights, Article 14(1)).  The United States agreed that helping refugees was a moral imperative and has been engaging in refugee resettlement ever since the post-World War II era.  It seemed that the world had learned its lesson in morality, embracing freedom from persecution as a fundamental and inalienable human right.  But oh how soon we forget…

Today, invoking the same fear-fueled policies and xenophobic rhetoric that doomed the passengers of the M.S. St. Louis, Donald Trump signed an Executive Order suspending the U.S. refugee resettlement program for at least four months, and banning all refugees from being resettled in the United States – including people who are fleeing persecution, war, conflict, oppression, and human rights violations.

Here are some facts (actual facts, not “alternative facts”):

We are in the middle of the largest refugee crisis since World War II, and this Executive Order sends the wrong message to the world.  The Trump Administration’s willful disregard of our nation’s history and our moral obligation to provide meaningful protection to refugees is un-American and will only fuel anti-American sentiment worldwide.  Benach Collopy implores the Trump Administration to reverse course before the history books include the story of another M.S. St. Louis.

2 thoughts on “Remember the St. Louis”