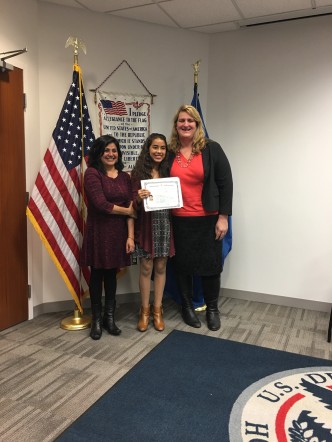 We are happy to announce Mariana Laredo as our Client of the Month for November 2016.  In a week full of dread over the results of the Presidential election, Mariana provided a ray of sunshine.  Yesterday, the U.S. Citizenship and Immigration Service formally acknowledged that Mariana was a citizen at birth when she was born in Mexico in 2002 to her Mexican mother, Rosalba and her American father, Gilberto Soto.  Rosalba has raised Mariana alone because Gilberto was murdered in his native el Salvador in 2004.  We have grown accustomed to murders in El Salvador, but Gilberto’s murder was different.  He was in El Salvador as a representative of the Teamsters trying to organize Salvadorans drivers to demand better working conditions.  Over the years, the belief that the government and agents working in coordination with the government were responsible for Gilberto’s murder has not been disproven.  Meanwhile, Mariana grew up in Cuernavaca, Mexico receiving benefits from her deceased father, but needing to visit the U.S. regularly to maintain a presence for benefits.  We were hired to find out if Mariana was a citizen at birth and to get something to prove it.  This is a tricky area of law- paternity must be established and Mariana’s father was dead.  Through DNA analysis and excellent legal work by co-counsel in NJ, Mariana obtained an order from the NJ court, where Gilberto had last lived, verifying that he was her father.  Then we needed to prove that he resided in the U.S. before Mariana’s birth, which we were able to do with records from the Teamsters.  Liana Montecinos tracked down the documents and yesterday, Mariana took the oath of allegiance to the U.S. confirming her citizenship.  We could not be happier for this family.

2 thoughts on “Client of the Month November 2016- Mariana Laredo”