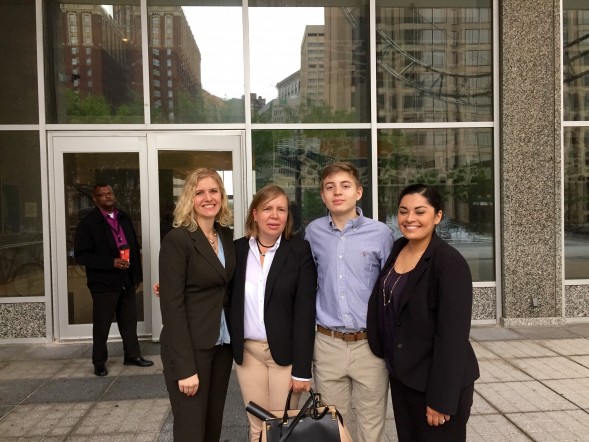 Our client of the month for June 2016 is Julia Marquez.  Ms. Marquez fled her native Venezuela with her son after suffering systematic and targeted attacks by the Venezuelan government and the government-backed paramilitary groups.  Ms. Marquez was targeted in Venezuela because, as a journalist and political activist, she dared to expose the corrupt and discriminatory practices of the Chavez regime and was dedicated to bringing democracy back to Venezuela.  As a journalist, Ms. Marquez wrote numerous opinion articles wherein she openly criticized and critiqued then-President Chavez’s economic and social policies.  She participated in many pro-democracy demonstrations that were frequently broken up by the national guard and government-backed paramilitary groups, such as Los Colectivos and Circulos Bolivarianos.

During one of these protests, Mr. Marquez was part of a group that was shot at by snipers hidden on rooftops of nearby buildings; she watched as one of her fellow protestors fell to the ground in front of her after being fatally shot by a hidden sniper.  The national guard was present that day, but instead of protecting the protestors, the national guard shot rubber bullets at them and threw tear gas into the crowd of terrified protestors to break them up.  Yet, despite the government’s efforts to quash the opposition that day, Ms. Marquez continued to write and peaceably protest the Venezuelan government.

Ms. Marquez’s individual plight to return democracy to Venezuela did not go unnoticed by the Chavez regime.  She was singled out, followed, physically attacked outside of her work and home, and threatened with death because of her work as an anti-government journalist and her political activism.  Although terrified for her safety, Ms. Marquez continued her work because she deeply believes in justice and equality for all.  In an attempt to silence Ms. Marquez’s voice for good, the attacks turned toward her son; armed men approached and threatened her son while he was waiting for Ms. Marquez to pick him up.  Ms. Marquez then had no choice but to flee Venezuela in order to save her son and herself.

After fleeing to the United States, Ms. Marquez applied for asylum with U.S. Citizenship and Immigration Services (“USCIS”) based on her work as an anti-government journalist in Venezuela, and her political activism.  USCIS did not grant her application, alleging that she did not establish she had suffered past persecution nor did she establish that there was a reasonable possibility that she would suffer persecution if forced to return to Venezuela.  Ms. Marquez’s application was referred to the Immigration Court and she and her son were placed in removal proceedings.

Shortly thereafter, Ms. Marquez came to Benach Collopy seeking representation in Immigration Court.  Attorneys Dree Collopy and Adilene Nunez worked with Ms. Marquez to prepare and present strong evidence in support of her asylum application and persuasive legal arguments to convince the Immigration Judge and the Department of Homeland Security that she meets the standards for asylum and deserves protection.  On the day of her merits hearing, the Department of Homeland Security was convinced that Ms. Marquez would indeed be in danger upon a forced return to Venezuela because of her prior work as an anti-government journalist and political activism.

Now, Ms. Marquez is writing again.  She says that she feels “safe now and can express my voice freely without fear of reprisals.  From now on I will write articles periodically again.  I will open a blog from here.  I witnessed what happened in Venezuela while I lived there.  I feel obligated to raise my voice in the face of this injustice.”

Benach Collopy is honored to have played a role in helping Ms. Marquez and her son obtain protection in the United States, where they can continue to have a happy, safe, and bright future.