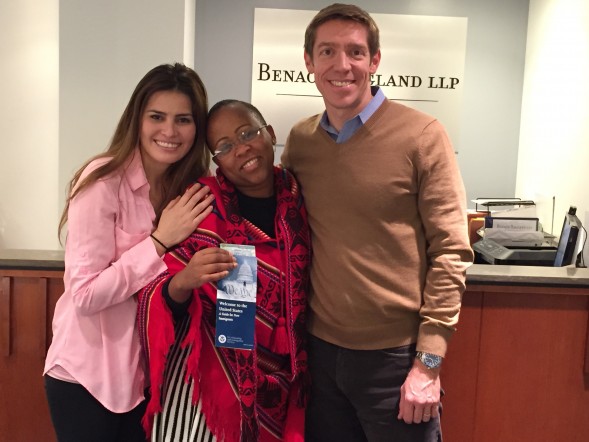 Our Client of the Month for January 2016 is Monique Kagayigayi. A survivor of the Rwandan genocide whose asylum claim was granted in 2004, Monique just received her green card after more than 10 years of waiting. This is the story of a remarkable woman and the legal efforts that were required to secure her status in the United States.

On April 6, 1994, Rwanda’s then-president’s plane was shot down, sparking more than three months of terror and killing throughout Rwanda that today seems unthinkable. Guns and machetes were the weapons of choice, and when the bloodshed finally subsided in July 1994, upwards of 1 million men, women, and children had been slaughtered, including Monique’s beloved husband Victor Kayonga.

Monique, now a very young widow, fled her home toward an unknown future along with her three children – Jupiter (9½), Cynthia (6), and Earvin (1½). Exhausted and terrified, they walked for days in hope of reaching safety, at times forced to step over and around the bloody corpses that littered the roads and countryside. Eventually, Monique escaped Rwanda and made it to the United States, where she immediately applied for asylum. Her request was granted a little more than two years later.

A person granted asylum in the United States is entitled, one year after approval of her case, to apply for lawful permanent resident status – commonly known as a green card. Thus, Monique filed an application to adjust her status and become a permanent resident. Typically, such requests are approved within six months of filing. But Monique encountered an unexpected, and unexplained, obstacle. Her case was placed on indefinite hold – the bureaucratic equivalent of being dropped into a black hole – where it languished for more than a decade.

As the years passed and Monique’s anxiety grew, she made countless inquiries to the U.S. Citizenship and Immigration Services (USCIS), both on her own and with others. But the inquiries yielded no result. Beginning to lose hope, Monique began researching to find someone who could stand with her and assist with the case. She was recommended to contact Benach Collopy LLP in Washington, DC, where she recounted her remarkable tale of escape and survival. Monique tearfully described her fear of being denied a green card, losing her asylum status, and facing deportation back to Rwanda.

Because years of requests and inquiries had failed to liberate her case from administrative purgatory, we advised Monique that the only viable option was to sue the government in a mandamus action, urging a federal district court judge to order USCIS to lift the hold and decide the case without further unreasonable delay. In response to the lawsuit, USCIS promptly issued a lengthy request for additional evidence instructing Monique to provide a sworn affidavit with detailed answers to more than 60 questions. Thomas Ragland and paralegal Liana Montecinos helped Monique prepare a comprehensive response.

On September 23, 2015, USCIS notified Monique that her case had been approved and her green card was on its way. After more than 10 years of waiting, and over 20 years since the life-altering events in her homeland and the tragic loss of her husband, Monique Kagayigayi became a lawful permanent resident of the United States. Benach Collopy is honored to have played a role in helping Monique and her children gain a secure future in America.