Last week was one of those weeks that makes us happy to be immigration lawyers.  It ended with several families relieved that their personal journeys to legal status in the U.S. are ended and their lives as U.S. residents have begun.  Here are their stories: 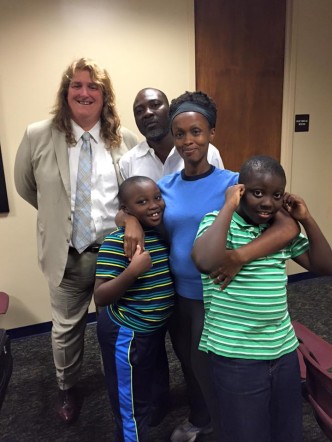 FM and CO are wife and husband.  She, FM, is from Rwanda.  CO is from Congo.  They have been in the U.S. since the 90s after entering on student visas and completing their studies. They met in the U.S. and fell in love.  They married and had two boys, both of whom are autistic.  The younger one, Joshua, has many challenges including communication, impulse control and learning.  FM and CO are constantly monitoring their boys’ health and must always been on high alert for behavioral issues.  Although they live in North Carolina, they came to our offices in Washington DC because they heard Benach on the radio discussing immigration court.  In the consultation, we discussed their fears of harm to their boys and themselves in Africa due to their disability.  It was shortly after the 4th Circuit issued its decision in Temu v. Holder in which it held mental illness could form the basis for a valid asylum claim.  We decided to apply for asylum.  However, due to the one year rule for asylum, the asylum office placed them into removal proceedings.  In removal proceedings, they could apply for cancellation of removal.  However, the immigration judge wanted them to proceed with the asylum application first and refused to consider the cancellation applications.  A major showdown was averted when Immigration & Customs Enforcement, envisioning protracted litigation over asylum, agreed to a grant of cancellation of removal.  After a thirty minute hearing, the Judge indicated that he would grant the applications.

It was truly an exceptional week and we are humbled and thrilled to share in these victories for our clients.