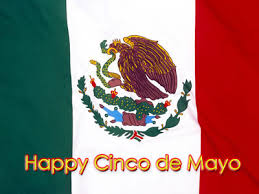 Yesterday, Star Wars fans celebrated what everyone’s Facebook feed unofficially called “Star Wars Day” and everyone uttered “May the Fourth be with you.”  Today, many Americans will be shouting “Feliz Cinco de Mayo” and “Happy Mexican Independence Day” while many others (yours truly) will be exclaiming “Happy historical day that my ancestors defeated the French!”  What does that mean?  And what exactly do we celebrate on Cinco de Mayo?

Well it all goes back to the 1860’s when Mexico was a heavily indebted country, owing a pretty penny to France, Britain, and Spain.   All three European countries wanted Mexico to pay up.  Mexico was able to negotiate deals with Britain and Spain, but France would not oblige.  Instead, the French headed to Veracruz, Mexico to try to establish its own empire on Mexico soil.  When they managed to shove President Juarez into retreat, the French then made their move on Puebla on their way to overtake the capital city. 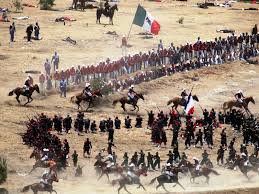 Six thousand well-equipped French troops headed to Puebla, a small town just east of Mexico City. A small Mexican army of 2,000 men, led by General Ignacio Zaragoza and who were not so well equipped, showed up to defend their country.  They fought on May 5, 1862, from the early morning until the early evening.  The small Mexican army fought until the French retreated.  The French lost nearly 500 soldiers, while the Mexican army lost less than 100.

So why is this significant?  Why do we celebrate the anniversary of this battle today?  Because this short battle was a symbol around which the Mexican people could unite and feel proud during a time when European governments wanted to tear apart the country for their taking.  It was a classic David-and-Goliath story that helped give the Mexican people strength during the French’s eventually successful attempt to capture Mexico City.

Today, we celebrate this small victory as a remembrance of the strength with which our ancestors fought to defend their country.  We celebrate this historic day with a sense of pride while also remembering that the same great strength lives deep within all of us, both immigrants and nonimmigrants alike.  Benach Collopy is proud to represent the many Mexican nationals who add this same strength and pride to the United States as part of American society.

Two fun facts about the Battle of Puebla:

So now you know!  Spread the knowledge because as a country of immigrants, it is important to understand a little bit about each other’s culture and history.