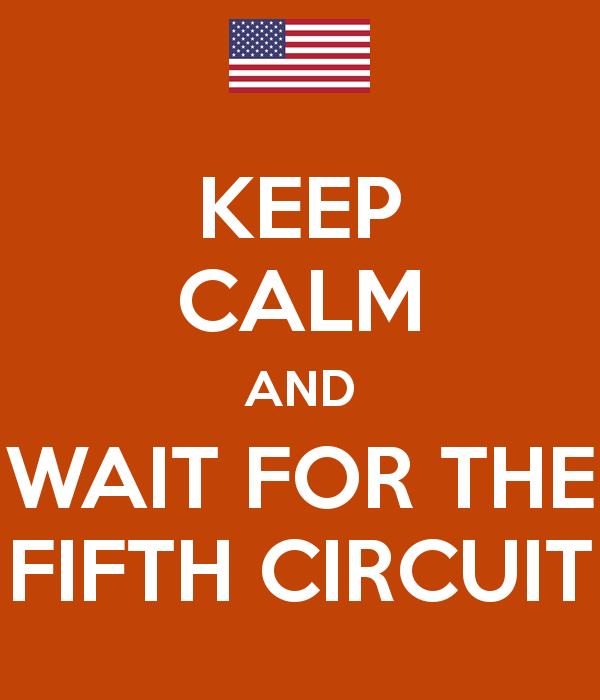 Here’s what happened: Late last night, Judge Hanen issued a decision on the Department of Justice’s request that he reconsider his injunction against DAPA and expanded DACA.  The rules of the Court of Appeals for the 5th Circuit required the DOJ to ask Judge Hanen to do this when the DOJ sought review in the 5th Circuit.  Given Judge Hanen’s previous decision, it is hard to imagine that he would reverse himself.  In other words, this was a necessary step, but not one that was expected to be successful.  The real game is on at the 5th circuit and not in Judge Hanen’s courtroom.

The timing of Judge Hanen’s decision is curious.  The decision was rushed out late last night, just hours after the 5th Circuit ruled in an other case, Crane v. Johnson,  brought by Mississippi and ICE bureaucrats against 2012 DACA.  That decision, as we discussed last night, does not bode well for Judge Hanen’s injunction.  In Crane, the 5th Circuit said that Mississippi’s’ claims of injury were far too speculative to support standing in Crane.  As Judge Hanen relied on Texas’ fairly speculative standing arguments in his injunction, the Crane decision, by the same court that is reviewing his injunction, is an ominous omen for his decision.  The devastating impact of Crane of Judge Hanen’s decision must have been obvious in Judge Hanen’s chambers yesterday afternoon.  It seems likely that Judge Hanen rushed this decision out there in an effort to “win the news cycle” and draw attention away from the apparent death sentence to his injunction that Crane foretells.

To ensure this, Judge Hanen threw an angry fit about DHS granting certain DACA beneficiaries three year extensions of DACA.  This snit refers to individuals who were granted DACA back in 2012 and sought extensions.  Under 2012 DACA, extensions were to be granted for two years.  However, under the executive action memos in 2014, DHS announced that it would grant DACA in three year increments.  Between November 2014 and February 2015, CIS granted about 108,000 three year work authorization cards.  In oral arguments in front of Hanen, the Judge wanted to know if DHS had implemented DAPA and expanded DACA and the government said that it had not.  It is nearly certain that the government understood that question to mean whether DHS had provided DAPA to any DAPA beneficiaries and whether individuals eligible under expanded DACA, but who were not eligible under original DACA, had been granted DACA.  The Judge is now upset that the government has issued a certain amount of three year DACAs to 2012 grantees and apparently considers this “implementation” of the November 2014 actions.

There have been many times in our careers here that we wish that the Judge would hold the government accountable to the law.  It is highly ironic that we see a judge doing this only in the case of the government giving young people longer work permits.  It is a pity that such judicial anger is put to such poor use.