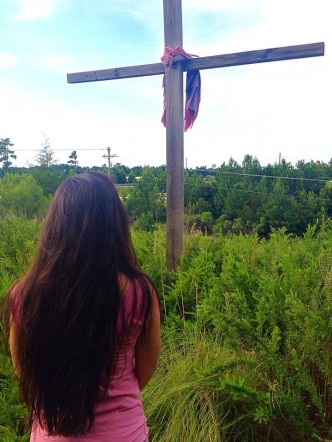 Our Client of the Month for February 2015 is J-N-, a remarkable young woman who after a years-long struggle has finally become a lawful permanent resident of the United States. J-N- earned her green card the hard way, having first to escape an abusive, controlling family, then survive a marriage wrought by threats and violence, and finally endure a six-year battle with U.S. immigration authorities intent on deporting her. J-N-‘s story is both harrowing and inspiring, but sadly not unique. Rather than being loved and supported, she was demeaned and abused by the very people who should have protected her. But what is most striking about J-N- is how open, kind-hearted, and generous she is, despite the hardships she has endured. With a wisdom born from experience, she now works with abused and neglected children, helping them get away from harmful situations and teaching them how to navigate the byzantine social services system.

J-N- came to the U.S. when she was a teenager and was raised in a very strict household. At the age of 16, her parents forced her to marry an American citizen and apply for a green card, so that she could remain with them in the U.S. Terrified of breaking the law but unable to refuse her parents’ demands, J-N- played her role in the charade and was granted conditional permanent residence. Soon thereafter, however, the fraud was discovered by federal agents and she was arrested and charged with committing marriage fraud. Once again, her parents pressured her to take the fall for her family, so she pled guilty to felony obstruction of justice and was sentenced to serve time in prison.

In 2008, after completing her prison term, J-N- was put in removal proceedings and charged with deportability for fraud and conviction for a crime involving moral turpitude. She hired Thomas Ragland to represent her, and he and his team at Benach Collopy worked out a strategy to not only prevent her from being deported, but to preserve her permanent resident status – despite the serious felony conviction and her past admission of marriage fraud. Benach Collopy prepared and filed a Form I-751 Petition to Remove Conditions on Residence, but as a waiver petition because the underlying marriage had been terminated and was admittedly fraudulent. The petition sought unconditional permanent residence for J-N-, based on the hardship she would suffer if forced to return to her oppressive homeland.

J-N-‘s case took years to work its way through the incredibly overburdened immigration court system. Finally, in January 2013, J-N- appeared for a merits hearing in the Arlington, Virginia Immigration Court. Though nearly five years had passed since removal proceedings were commenced, the attorney representing the Department of Homeland Security was unprepared and the Immigration Judge postponed the case for another year. At the next hearing in January 2014, Ragland persuaded the DHS counsel to consent to a motion to terminate removal proceedings, so that J-N- could pursue her I-751 petition before U.S. Citizenship and Immigration Services (USCIS). The Immigration Judge was surprised by the parties’ agreement, given J-N-‘s criminal record and past admission of marriage fraud, but he agreed to terminate the proceedings. J-N- and Benach Collopy then focused their efforts on the I-751 waiver petition.

In October 2014, Ragland accompanied J-N- to her I-751 interview at USCIS, which she handled with grace and maturity, describing in stark terms the hardship she would face if forced to leave the United States. Three months later, the I-751 petition was approved and J-N- was granted unconditional permanent resident status. Her long immigration struggle behind her, she can now focus her energies on working with kids at risk and rebuilding her life in America. A tremendously rewarding victory for a very deserving young woman. Congrats J-N-!