Great news right out of our own backyard.  Montgomery County, Maryland, the county that surrounds most of Northwest Washington DC and the most populous county in Maryland, announced today that its jails would no longer honor detainers issued by Immigration & Customs Enforcement except under very specific circumstances.  This decision places a vice grip on one of the region’s most reliable ICE enforcement pipelines and is further evidence that local municipalities are rejecting the damage done to communities by the heavy-handed enforcement activities of the current administration.  We answer some basic questions about what this change means.

What is a Detainer?

A detainer is a request filed by Immigration & Customs Enforcement with a jail or prison asking the jail or prison t0o continue to detain an individual beyond their release date so that ICE can assume custody over the individual.

Yes, an “ICE hold” is a common name for a detainer.

Are there any rules about detainers?

Yes, under U.S. immigration law, ICE may only request that a jurisdiction hold an individual up to 48 hours beyond their scheduled release date (not including holidays and weekends) for ICE to assume custody of a detainee.

Why does ICE issue detainers?

Is a jurisdiction obligated to honor ICE detainers?

No.  An increasing number of jurisdictions are rejecting ICE detainers as inconsistent with their own law enforcement prerogatives.  Over 250 jurisdictions including the State of California, New York City, Washington DC, Boston, Denver and San Francisco refuse to honor ICE detainers.

What happens if ICE does not assume custody over an individual after 48 hours?

The facility should release that individual.  The authority to detain an individual beyond their release date is limited to 48 hours.  Municipalities that detain individuals beyond that period are at risk of liability for unlawful detention.

Can an ICE hold prevent someone from being released on bail pre-trial?

Many local judges and prosecutors wrongly assume that a person subject to a detainer can not be released on bail pre-trial.  A detainer does not render someone ineligible for release on bond.  Many jurisdictions have assumed that because a detainer exists, bail may not be ordered.  Sometimes if a person gets bail from a judge, the family has a hard time making the payment because the clerk believes she can not take it due to the detainer.  Individuals eligible for bail should seek bail despite the existence of a detainer.  Once the bail has been made, ICE may assume custody.  However, since an individual will not have been convicted of a deportable offense at that time, ICE’s ability to detain may be limited.  Criminal attorneys seeking bail for clients subject to detainers should coordinate with immigration counsel to pursue the most advantageous strategy for the client.

Why did Montgomery County do this?

In April 2014, Maryland Governor Martin O’Malley determined that jurisdictions in Maryland may face liability for detaining individuals after their eligibility for release.  As counties absorbed the impact of this opinion and sought to protect themselves, counties began to rethink the wisdom of cooperating with detainers.  In August 2014, the City of Baltimore stopped honoring detainers followed by Price George’s County in October.  With Montgomery County, Maryland’s largest county, following suit, the momentum against detainers is unmistakable. 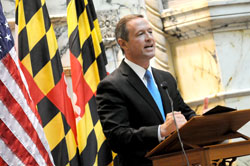 Why did Martin O’Malley do this?

O’Malley is widely believed to be running for President as a Democrat in 2016.  O’Malley has clearly chosen to take a more aggressively pro-immigrant stand than other potential Presidential candidates.