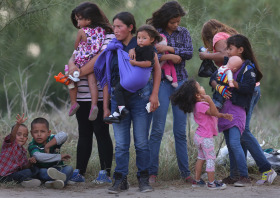 In a major victory for immigrants, the Board of Immigration Appeals ruled yesterday that women who are unable to leave domestic violence caused by their husbands may qualify as a particular social group for asylum purposes.  This decision brings to an end a lengthy period of uncertainty regarding the viability of claims to asylum by women fleeing domestic violence.  The Board’s decision in Matter of A-R-C-G-, 26 I.&N. Dec. 388 (BIA 2014), establishing clear and controlling law to the nation’s immigration judge that victims of domestic violence can qualify for asylum.  While the law has been moving in this direction for quite some time, there was still a lack of Board precedent obligating immigration judges nationwide to follow it.  While progressive judges cobbled together legal authority from circuit court cases and unpublished decisions, recalcitrant judges used the lack of directing precedent to deny domestic violence claims.  The Board’s decisions removes any uncertainty that victims of domestic violence can obtain asylum in the U.S. due to the domestic violence they suffered in their home country.  The decision could not be more timely as the influx of women and children on the Southern border being detained in Artesia, New Mexico has shone a spotlight on the ability of victims of domestic violence to seek protection under U.S. asylum law.  The decision gives these applicants a potent new weapon and undermines the administration’s ability to remove them with barely a semblance of due process.

The decision is the result of nearly two decades of litigation on the topic of victims’ of domestic violence eligibility for asylum.  This issue has been pushed for all that time by Karen Musalo of the Center for Gender and Refugee Studies at the University of California at Hastings, who conceived the legal basis for the asylum claim and saw through a terrible BIA precedent called Matter of R-A-, which, in the BIA’s first analysis, denied asylum eligibility to victims of domestic violence.  R-A- eventually got settled with Rodi Alvarado being granted asylum but without a precedent decision.  That precedent decision came down yesterday.

In yesterday’s decision, the BIA squarely held that ” ‘married women in Guatemala who are unable to leave their relationship’ can constitute a cognizable particular social group that forms the basis of a claim for asylum or withholding of removal.”  The Board considered a case where a married woman suffered atrocious abuse at the hands of her husband, who tried to leave the relationship, and who was rebuffed by the police when she sought help.  The BIA considered the development of case law on particular social groups, the facts of the case, and the social context in which domestic violence occurs and determined that the social group of “married Guatemalan women who are unable to leave their relationship” can support a claim to asylum.

Of course, the individual facts and social context of the case are extremely important.  However, the decision gives strong support to the thousands of women fleeing domestic violence by coming to the U.S. and provides hope that there is an alternative to the violence and degradation they experienced in their home countries.

One thought on “Victory! BIA finds Domestic Violence Victims May Qualify for Asylum”