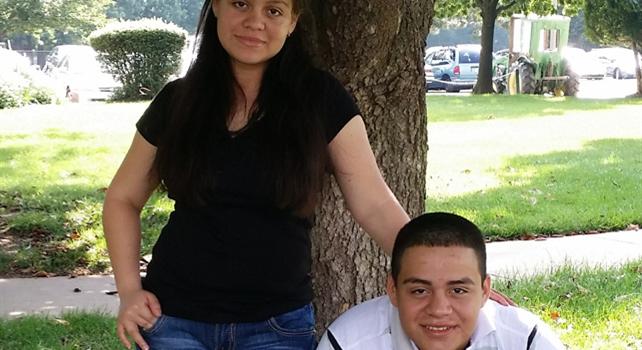 Our Clients of the Month for July 2014 are Juan and Carolina, brother and sister from El Salvador, who received their residence in June.  We are using pseudonyms and not their actual names due to danger that their family members could face from gangs in El Salvador.  About three years ago, when Carolina was 16 and Juan was 12, members of a gang decided to force the family from their house in El Salvador.  Juan and Carolina had been living with their grandmother as their parents had left El Salvador looking for work.  Once they lost their home, Juan and Carolina made the decision to try to reunite with their father, who was living in Virginia.  They braved the treacherous journey north and were apprehended by U.S. Customs and Border Protection.  As unaccompanied minors, they were transferred to the care of Health and Human Services, which tracked down their father in Virginia.  The kids were released to his custody.  Removal proceedings were commenced.  The kids started attending J.E.B. Stuart High School in Falls Church, VA, where BR’s own Liana Montecinos went to school.  The non-profit organization she founded, United for Social Justice, still operates at JEB Stuart and Liana learned about the kids and their upcoming removal proceedings.  Liana brought them to BR, where we quickly realized that they qualified for Special Immigrant Juvenile Status, having been abandoned by their mother.  With the help of L&L Immigration Law, we sought a court order in Fairfax county court establishing custody for the father and finding that the child’s best interests were served by them remaining in the U.S.  With that in hand, we were able to apply for SIJ classification and later adjustment of status.  We were able to get proceedings terminated and, last week, Rachael Petterson accompanied them to the Citizenship & Immigration Service office in Fairfax, which granted them residence.  Juan and Carolina are amazing kids and will make a great contribution to our community.

Juan and Carolina’s story is typical of the unaccompanied minors who are flooding the U.S. Southern border.  They flee unimaginable violence in their home country and seek to reunite with parents in the U.S.  Given a chance to state their case, they have an opportunity to remain in the U.S. and thrive.  The administration’s plan to curtail due process rights for kids like Juan and Carolina is reprehensible and should be replaced with a system that gives all children the right to tell their story and get a shot at remaining in the U.S.