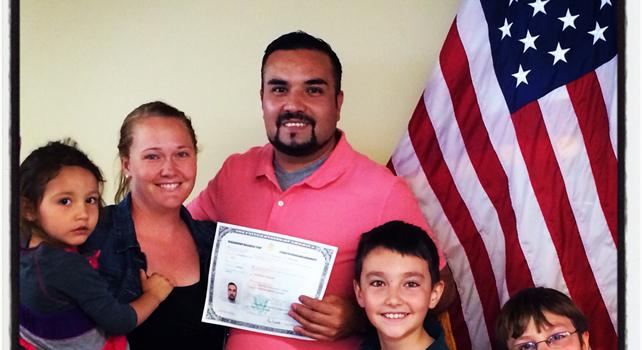 Our Client of the Month for May 2014 is Francisco Nuñez Villegas. Francisco recently became a United States citizen after a seven-year emotional roller coaster ride, filled with both highs and lows and exciting and frightening moments. Francisco’s story is a story of love and family unity. It begins back in December of 2002, when he was still living in his native Mexico. That is when he met and fell in love with Melissa, an American student who was visiting Mexico during Christmas break. Francisco and Melissa spent every second together before Melissa had to return to Costa Rica for her second semester studying abroad. While Melissa was studying in Costa Rica, Francisco wanted to learn more about Melissa’s culture, so he decided to spend some time living with friends in the United States. After being refused a visa, Francisco decided to cross the border anyway to join his friends, determined to gain first-hand experience in his true love’s home country. He spent about nine months visiting with his friends in the United States before returning home voluntarily to Mexico.
Over time, Francisco and Melissa’s friendship grew into a romantic and committed relationship. Their devotion to one another was clear, as they kept in touch over long distances, with Francisco living in Mexico and Melissa living in the United States. Melissa visited Francisco in Mexico as often as possible, and eventually, the couple committed themselves to a life together. Melissa and Francisco had two children together and then decided to marry so the family could be together every day. Engaged and excited to unite their family and start their married life together, in 2007, Francisco applied for a K-1 fiancé visa at the U.S. consulate in Mexico. His K-1 visa was granted and he entered the United States to join Melissa and their two boys. Melissa and Francisco married, and the family could not have been happier…until Francisco’s adjustment of status interview in 2008.
During Francisco’s interview, the immigration officer told them that Francisco had not disclosed his previous presence in the United States without a visa when he applied for his K-1 visa. Because of this, Francisco needed an I-601 extreme hardship waiver to pardon his previous unlawful presence and misrepresentation on his K-1 application. Without this waiver, Francisco could not become a permanent resident, could not receive a “green card,” and could not stay in the country with his U.S. citizen wife and two sons. The couple’s hearts sank, as they realized that they were now threatened with Francisco’s deportation and the continued separation of their young family. This was particularly frightening given the fact that their youngest son was suffering from a serious heart condition and had considerable medical needs.
That is when Dree Collopy stepped in. Dree and her legal team prepared and filed Francisco’s I-601 waiver application and successfully demonstrated that Melissa, a United States citizen, would suffer extreme hardship if Francisco was not admitted to the United States as a permanent resident. With the approval of the extreme hardship waiver, Francisco was granted permanent resident status in the United States. Melissa and Francisco could stay united, together with their sons, living happily in the United States.
Once Francisco’s immigration problems were solved, the couple could truly celebrate their marriage and their future plans, along with their family and friends. They celebrated not only their marriage, but also, their togetherness, a virtue that this loving and tightknit family will never take for granted. On April 23, 2014, with deep gratitude, Francisco took the oath of allegiance to the United States and became a U.S. citizen while Melissa and their three children looked on with pride.