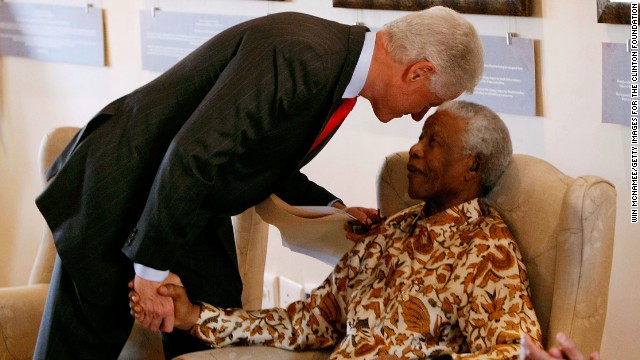 As accolades from world leaders pour in to remember Nelson Mandela, it is hard to recall that for decades, much of the world accepted the apartheid South African government’s designation of Mandela as a terrorist.  It would be tempting to write that designation off as a relic of the Cold War, unfit for these modern times.  Yet, it was not until 2008 when Nelson Mandela and the African National Congress were removed from the U.S. terrorist list.  2008!  Are you kidding me?  Twitter and Facebook have been around longer than Mandela has been off the U.S. terrorist watch list.  George W. Bush (43), and not George H.W. Bush (41) signed the legislation removing him from the list!  Miley Cyrus was already Hannah Montana by then!

The African National Congress was added to the list of designated terrorist organizations in the 1970s.  There it remained for decades.  In 1989, the Berlin Wall fell and shortly thereafter the Soviet Union collapsed.  As the world charged, South Africa did too.  Crippled by U.S. sanctions, which were imposed over President Ronald Reagan’s veto, the South African regime released Mandela and entered into a new phase of democracy that included all the citizens of South Africa.  Yet, the U.S. continued to consider the ANC to be a terrorist organization for decades.

Designation as a terrorist organization has a wide-ranging impact on an organization, its members, donors, and supporters.  In areas from banking to criminal law, the impact is profound.  However, it is in immigration matters where its impact is most often felt.  Members and supporters of designated terrorist organizations are denied admission to the U.S.  If they make it in to the United States, they can be denied asylum or residence.  The bar does not only apply to the leaders, but to people who have provided “material support,” a broad term that has been used to deny admission to a client of ours, an ophthalmologist living in Canada who was extorted by members of Hezbollah into giving money.  The terrorism related grounds of inadmissibility (TRIG) are noted for the inflexibility and their durability.  Although the Secretary of State has the authority to revoke the designation of certain organizations and the Secretaries of State and Homeland Security can grant waivers of inadmissibility to members of designated groups, it took an act of Congress to make it happen for the ANC.

It was not until 2008 that Congress passed a law directing the Departments of State and Homeland Security to remove the ANC from the terrorist watch list.  H.R. 5690 was passed to “remove the ANC from treatment as a terrorist organization for certain acts or events, provide relief for certain members of the ANC regarding admissibility and other purposes.”  Secretary of State Condoleeza Rice called it an embarrassment that she had to grant a waiver to Mandela and members of his entourage whenever he sought to travel to the U.S.

This lengthy delay demonstrates the bureaucratic difficulty of getting off the designated foreign terrorist organization list.  Despite more than a decade of redemption and rehabilitation for the ANC, the executive branch proved incapable of revisiting the designation and normalizing relations with the new leadership of South Africa.  This problem persists today.  Thousands of individuals find them caught in the grips of inadmissibility due to nominal contact with designated terrorist organizations.  Once that connection has been made, the government has  proven incapable of undoing it even where the facts and circumstances clearly warrant it.

Another group that has managed to get itself off the foreign terrorist organization list is the Mujahedin-e-Khalq, an Iranian exile group opposed to the murderous Iranian

government.  In a misguided effort to appeal to perceived moderates in the Iranian government, the U.S. designated the MEK a foreign terrorist organization in 1997, hobbling the most viable opposition to the Iranian regime.  It took several years of litigation to force Secretary of State Hillary Clinton’s hand to remove the MEK from the list in October 2012.  However, even the removal of the MEK from the designated terrorist organization list has not facilitated the admission of close to 3000 Iranian refugees living in danger at Camp Liberty in Iraq.  The Liberty refugees formerly lived in Camp Ashraf in Iraq and served as a base of political opposition to the Iranian government.  In a deal to help the U.S. military in Iraq, the Ashrafi refugees moved to Liberty with the expectation of resettlement as refugees in the U.S. and other countries.  A year after the revocation of the terrorist designation and the move from Ashraf to Liberty, the refugees wait for the U.S. government to navigate their admission due to the lingering stain of the terrorist designation.  In the meantime, on September 1, 2013, armed assailants attacked those left in Camp Ashraf, killing 52 MEK members.  The delay by the U.S. in addressing the consequences of a faulty terrorist designation is causing lives to be lost.

We have little doubt that in time the designation and vilification of the MEK will be seen to be as repugnant as the designation of the ANC.  Like the ANC did, the MEK struggles against a brutal and tyrannical regime that denies fundamental human rights to its citizens.  It is quite possible that one day the MEK leadership will be the new government of a democratic and secular Iran and we can only hope that a future U.S. Secretary of State is not embarrassed by the MEK’s treatment by the U.S. government.