As official Washington administers last rites to immigration reform for 2013 only to have it pop up again with a barely detectable pulse, undocumented immigrants and their allies continue to press the President to use his power as the executive to suspend removals.  Marches, sit-ins, hunger strikes, and social media combat for #notonemore deportation have reached a fever pitch as the House seems to be putting the last nail in the coffin for the comprehensive immigration reform bill passed by the Senate in June.  A family feud exploded into the open today when activist Ju Hong challenged the President of the United States as the President delivered a steaming bowl of bromides to a friendly pro-immigrant crowd.  Hong challenged the President and told the President that he has the power and the authority suspend deportations.  The President engaged Mr. Hong and said that he did not possess such authority.

So, who’s right?  Is Hong right and the President can, as a function of executive power, halt deportations?  Or is the President right that he is obliged to enforce the law and Congress must act in order to reform our broken immigration system?  The answer, like always, is very unclear.  In the President’s favor is that his constitutional obligation to “take care that the laws are faithfully executed” prohibits his ignoring the laws contained in the Immigration & Nationality Act.  However, in Hong’s favor is the fact that the President, through Deferred Action for Childhood Arrivals (DACA), relief for certain widows of American citizens, and the recent Parole-in-Place memo for military families, has already exercised his executive authority not to enforce certain portions of the immigration law.  As Hong might argue, if the President can choose not to enforce the law for certain sub-groups of immigrants, what is there to stop him from expanding the beneficiaries of his grace to other groups?  The question is whether there is a difference between a limited exercise of discretion versus a wholesale refusal to enforce the majority of the the Immigration & Nationality Act (“INA”).  Let’s also agree before we look at this that it would be better if Congress passed a humane and comprehensive reform that kept families together.  However, as it appears that Congress has no intention of doing that, let’s take a look at what the President could do without Congress.

In 1984, the Supreme Court heard a case called Heckler v. Chaney.  In this case, inmates scheduled to be executed by lethal injection argued that the lethal drugs were not being used in conformity with their use as approved by the Food and Drug Administration (FDA) and they brought suit to compel the FDA to take enforcement action against the sheriff’s departments that were improperly using the drug.  The Supreme Court held that the decision to initiate, terminate or suspend enforcement proceedings were squarely within the unreviewable discretion of the executive branch.  The Supreme  Court  wrote:

This Court has recognized on several occasions over many years that an agency’s decision not to prosecute or enforce, whether through civil or criminal process, is a decision generally committed to an agency’s absolute discretion (citation omitted).   This recognition of the existence of discretion is attributable in no small part to the general unsuitability for judicial review of agency decisions to refuse enforcement.  The reasons for this general unsuitability are many.  First, an agency decision not to enforce often involves a complicated balancing of a number of factors which are peculiarly within its expertise.  Thus, the agency must not only assess whether a violation has occurred, but whether agency resources are best spent on this violation or another, whether the agency is likely to succeed if it acts, whether the particular enforcement action requested best fits the agency’s overall policies, and, indeed, whether the agency has enough resources to undertake the action at all.  An agency generally cannot act against each technical violation of the statute it is charged with enforcing.  The agency is far better equipped than the courts to deal with the many variables involved in the proper ordering of its priorities.  Similar concerns animate the principles of administrative law that courts generally will defer to an agency’s construction of the statute it is charged with implementing, and to the procedures it adopts for implementing that statute(citation omitted).  In addition to these administrative concerns, we note that when an agency refuses to act it generally does not exercise its coercive power over an individual’s liberty or property rights, and thus does not infringe upon areas that courts often are called upon to protect.  Similarly, when an agency does act to enforce, that action itself provides a focus for judicial review, inasmuch as the agency must have exercised its power in some manner.  The action at least can be reviewed to determine whether the agency exceeded its statutory powers (citation omitted).  Finally, we recognize that an agency’s refusal to institute proceedings shares to some extent the characteristics of the decision of a prosecutor in the Executive Branch not to indict — a decision which has long been regarded as the special province of the Executive Branch, inasmuch as it is the Executive who is charged by the Constitution to “take Care that the Laws be faithfully executed.” U.S. Const., Art. II,  3.

In this instance, the Supreme Court seems to support Hong’s position when it states that a decision not to prosecute or enforce is left to the agency’s unreviewable discretion.  This would support the argument that the administration could make a decision not to enforce the Immigration & Nationality Act.  Yet, the Supreme Court did not give the President the carte blanche to ignore the statute.  “We emphasize that the decision is only presumptively unreviewable; the presumption may be rebutted where the substantive statute has provided guidelines for the agency to follow in exercising its enforcement powers.  Thus, in establishing this presumption, . . .  Congress did not set agencies free to disregard legislative direction in the statutory scheme that the agency administers.  Congress may limit an agency’s exercise of enforcement power if it wished, either by setting substantive priorities, or by otherwise circumscribing an agency’s power to discriminate among issues or cases it will pursue.”

As an example, the Supreme Court cited a discrimination case, Adams v. Richardson, in which a court ordered federal education officials to enforce portions of the Civil Rights Act of 1964.  In that case, a court determined that education officials had failed to enforce a clear statutory directive from Congress and ordered the officials’ compliance.  It could be argued that Congress provided in the INA very specific guidance to the executive branch about how to enforce immigration law.  The INA provides for mandatory detention of certain foreign nationals, bars many removable individuals from all relief, and restricts jurisdiction in federal court over agency actions.  In fact, when the President established DACA, a number of ICE bureaucrats brought suit arguing that the INA provides a mandatory duty upon ICE to initiate removal proceedings against all removable foreign nationals that ICE encounters.  While the ICE bureaucrats thankfully lost, they lost on an employment law/ standing issue and the initial decisions of the judge suggested that he accepted the bureaucrats’ claims.

Thus, while the President and his appointees have considerable discretion in choosing how to enforce the law, it is less clear that they have the ability to decide to suspend all removals, or even a substantial majority of them.  While principles of prosecutorial discretion– the authority of an enforcement agency to utilize limited resources in the best way it seems fit– legitimately empower the President to identify priorities, the President would not seem to have the power to decide not to enforce immigration law.

This is not to say that the President could not be bolder with his use of his discretionary authority.  DACA has been the boldest step he has taken so far in asserting his executive authority to remedy the harsh effects of U.S. immigration law.  Could the President extend his discretion to limit the removal of parents of U.S. citizens?  Could he expand DACA to include more people?  Could he decide that no children below 16 should be removed?  This is where the legal question turns political.  The anti-immigrant right wing already believes that, despite the record number of removals, the President is not enforcing immigration law.  Should the President grow the universe of those eligible for favorable exercises of discretion, it is likely that whatever life remains in positive immigration reform in Congress will evaporate immediately.  As long as the promise of immigration reform remains flickeringly alive, the President is unlikely to antagonize his Congressional tormentors.  The House GOP seems to get that and feeds us all little scraps of “immigration reform is alive” every now and then in an effort to stave off unilateral action.

We tend to look at our times as if the political atmosphere was never more poisonous.  That is simply not true.  There have been plenty of times in our history where a President took a very expansive view of his authority.  Andrew Jackson did it on a nearly daily basis.  Lincoln utilized his powers as commander-in-chief to imprison half of Maryland and emancipate millions of enslaved humans.  Franklin Roosevelt threatened to add six new justices to the Supreme Court to tilt the balance on the Court to favor his agenda.  Harry Truman took over steel mills during the Korean War.  These were bold political moves in response to urg 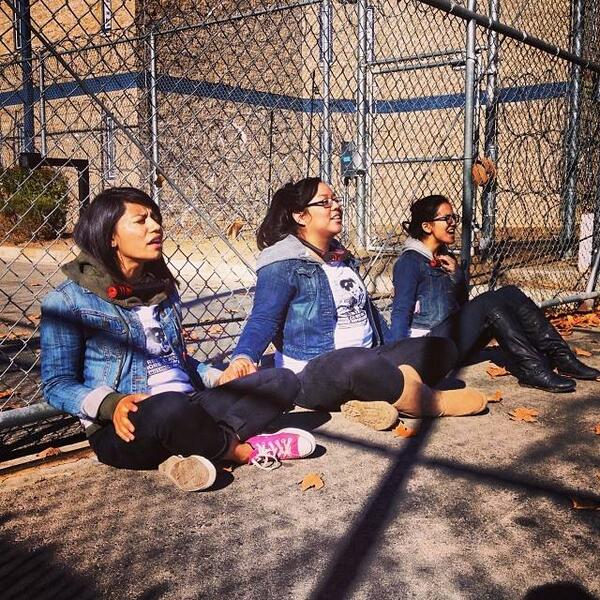 As the atmosphere grows more poisonous, perhaps the President will channel his inner Jackson or Roosevelt and take these drastic steps.  Perhaps Mr. Hong’s biggest contribution was to serve as Jefferson’s “firebell in the night” to tell the President that the situation has grown desperate.  As the President spoke, young activists, chained themselves in civil disobedience at the Adelanto detention center in California.

As Congress fails to deliver any relief to immigrant communities, the pressure will continue to mount on the President to take a leap of faith and assert a robust exercise of discretion and reap whatever political harvest is unleashed.

2 thoughts on “Does the President Have the Power to Stop All/Most Removals?”