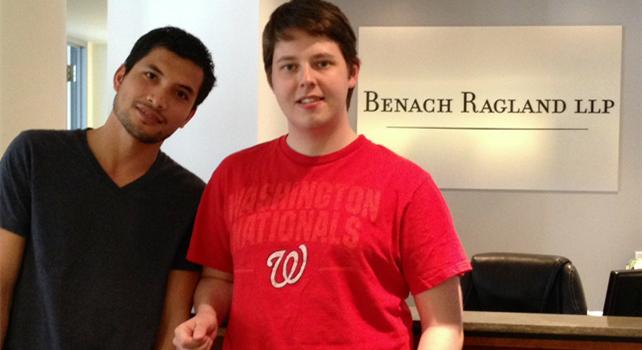 Our Clients of the Month for October 2013 are Erickson Badillo and John Taylor. Erickson and John got married in Maryland in July 2013, weeks after the U.S. Supreme Court ruled in Windsor that the Defense of Marriage Act, which prohibited the federal government from recognizing marriages valid under state law, was unconstitutional. The Windsor decision required the U.S. Citizenship & Immigration Service (CIS) to recognize valid same-sex marriages and to approve petitions by U.S. citizens on behalf of their same-sex foreign spouse. This has had a tremendous impact in our region as both Maryland and the District of Columbia (come on, Virginia!) allow same-sex marriage. A mere three months after Widnsor and their marriage, John and Erickson went to the U.S. CIS office in Fairfax, Virginia, where the CIS officer questioned them like any other couple. John and Erickson recounted how they met, where they live and how they are raising a puppy together. Sitting in the CIS office, all of us- , John, Erickson and the CIS examiner- were clearly aware of the historic import of the moment. And when the case was decided and reviewed just like any other case, we knew that change had made its way to the CIS. Erickson received his green card in the mail this week and we are thrilled for John and Erickson, who still can not quite believe the magnitude of the change that has occurred in four short months.