Benach Collopy is very pleased to announce that Rachael Petterson has joined the firm as an associate attorney.  We are very excited that Rachael has chosen to join our team and look forward to her contributions on behalf of our clients for many years to come. 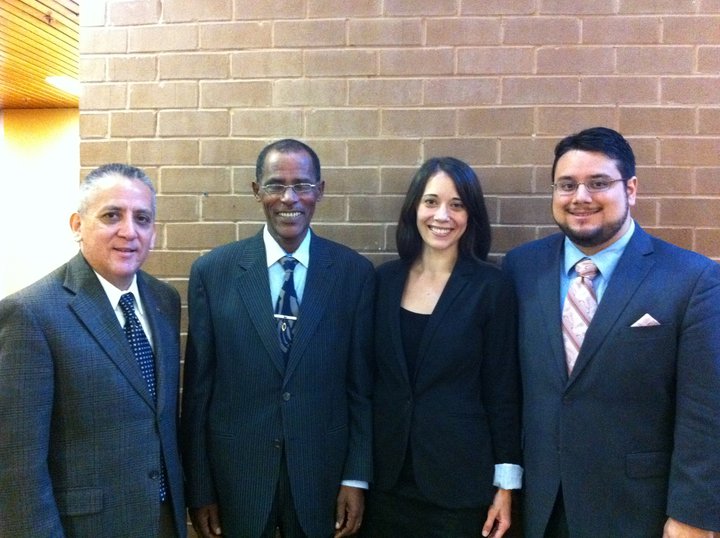 Rachael has been a FOBR (Friend of Benach Collopy) since our start in April 2012.  A graduate of George Washington University Law School, Rachael jumped right into the practice of immigration by assuming the reigns of the GW Immigration Law Clinic while Professor Alberto Benitez was on sabbatical.  Rachael supervised the work of twelve student-attorneys who provided pro bono legal services to the immigrant community in the DC area.  In a remarkable year, Rachael served as a student in the clinic, graduated from law school and moved right into supervising the clinic.  During that time, the clinic scored a number of impressive courtroom victories and its alumni have gone on to meaningful careers in immigration.  The attached photo shows Rachael with Professor Benitez, a happy client and student attorney and FOBR Jose Pitti after one of their victories.  (See if you can guess who is who!). Benach is also a graduate of George Washington Law School and a former member of the Immigration Clinic.

Rachael left academia to engage in private practice.  She worked with Ivan Yacub, a terrific litigator based out of Virginia.  Ivan is a well-known advocate who is always pushing the legal envelope for his clients.  Rachael undoubtedly learned a lot by Ivan’s side.

Before law school, Rachael was a Peace Corps volunteer in Guatemala.  In Guatemala, Rachael helped individuals who suffered human rights abuses to assert their rights under laws enacted at the end of the civil war that consumed Guatemala in the late 20th Century.  The greater DC area is home to a large Guatemalan population that fled that same barbarous war.

A native of Texas, BR is principally concerned whether Rachael can make some excellent Texas barbecue and whether she can dance a proper two-step.

Rachael will move right in to handling our growing caseload of immigration litigation, provisional waivers, complex criminal immigration matters, motions practice, and asylum and refugee protection.  We look forward to introducing her to all of our clients and friends.