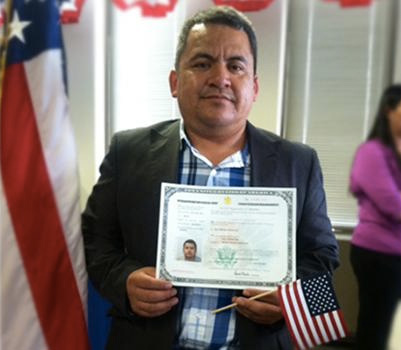 Abel Rodriguez is our client of the month for August 2013.  On July 30, 2013, Abel took the oath of naturalization to complete his journey from undocumented immigrant to citizen.  Abel’s “path to citizenship” was long, circuitous and by no means certain.  It was Abel’s determination, constancy, and affability that go him through a thicket of laws to get to the point of becoming a citizen.

Abel is from Mexico.  In the mid 1990s, he entered the first time and was placed into deportation proceedings, where the Judge granted him voluntary departure. A mathematical error had him depart after the voluntary departure period expired, resulting in his departure under a removal order.  The needs of his family were too great and Abel returned to the U.S.  He started working in a parking garage on Capitol Hill.  His reliability and affability impressed the tenants and, when they saw his usual good spirits sagging, they noticed.  Abel explained to them that he was facing removal and that he had two U.S. citizen children, one of whom was autistic.  Because Abel had re-entered after leaving under a deportation order, he was subject to reinstatement, where DHS could just remove him without putting him in front of a Judge.  However, DHS had the authority to exercise its discretion and not reinstate the old order and to give him a hearing in front of the immigration judge.  We undertook a major campaign to convince the DHS officials to place him into removal proceedings and they exercised their discretion to do so the day before they were telling him he had to depart.  Abel said good-bye to his wife and kids before relief came.  One year later, the Judge teared up as Abel told the story of how he has to work with autistic son to accomplish simple tasks.  She granted cancellation of removal and Abel received his residence.  A couple of years later, his wife, Flavia received her residence.

As we stood in Baltimore’s Hopkins Plaza yesterday, Abel owned the company that provides the parking services in the garage he started in over a decade ago and Flavia is working on getting the Escalade from MaryKay Cosmetics, having earned the RAV 4 already.