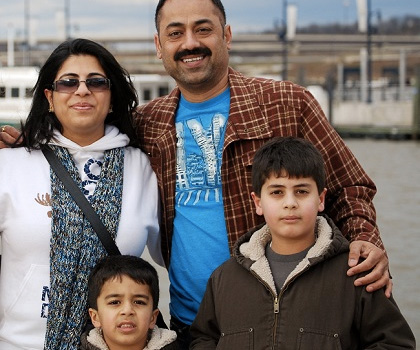 Khuswant and Shweta Singh are our June clients of the month. They came to the United States in 1999 in search for better opportunities and the American dream. Khuswant began working for an employer who agreed to sponsor him for an employment-based visa, while Shweta enrolled in school to continue her education. They continued working and contributing to their communities, while they awaited adjudication of Khuswant’s employment-based petition. After ten years in the United States, however, Khuswant’s employment-based petition was denied and the Singhs began to panic. By that time, they had two young U.S. citizen children who were the complete focus of their daily lives and who had unique medical and educational needs – needs that could not be met in Khuswant and Shweta’s native country of India. Everything the Singhs did was for their children: working hard and maintaining stable employment; paying their taxes every year; participating in their religious community; volunteering in Ann Arundel County; abiding by the law; actively seeking lawful immigration status; furthering their own education; and dedicating every waking moment to meeting their children’s medical, educational, and developmental needs.

Khuswant and Shweta were placed in removal proceedings before the Immigration Court, where they applied for cancellation of removal. Cancellation of removal required that Khuswant and Shweta demonstrate ten years of physical presence in the U.S., good moral character, and that their removal would cause exceptional and extremely unusual hardship to their U.S. citizen children (ages 8 and 4 at the time). If the application was granted, Khuswant and Shweta would become permanent residents of the United States. If it was not, however, the Singhs would have to uproot their lives and return to India, a country where their children’s medical and educational needs would not be met. After over two years of hearings and the presentation of evidence and testimony before the Immigration Court, Khuswant and Shweta’s applications for cancellation of removal were granted. In her written decision, the Immigration Judge discussed in detail Khuswant and Shweta’s tireless dedication to their U.S. citizen children, and noted “the fine work of Respondent’s counsel in preparing the submitted materials and conducting focused and pertinent direct examination of her witnesses.”