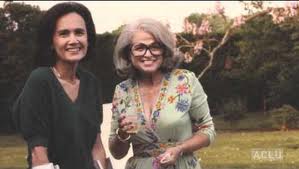 One of the biggest immigration cases of the current Supreme Court terms is not about immigration at all.  Today, March 27, 2013, the Court heard arguments in U.S. v. Windsor, a case that is about the validity of a same-sex marriage and its recognition under U.S. law.  In 2007, Edie Windsor married her longtime partner, Theya Speyer in Canada, which allows same-sex marriage.  When Speyer died in 2009, Windsor was hit with a $363,000 tax bill that she would not have been required to pay if Speyer had been a man.  Federal law passed in 1996, the Defense of Marriage Act (DOMA), prohibited the federal government from recognizing Windsor and Speyer’s marriage and disallowed Windsor from claiming an exemption to the federal estate tax.  Windsor sued and prevailed in the U.S. Court of Appeals for the Second Circuit.  The government, now being represented by conservative members of the House of Representatives because the Justice Department refuses to defend the Act, sought Supreme Court review and the Justices heard the case today.  A decision is due by June.  According to Supreme  Court guru and editor of the SCOTUSblog.com, Tom Goldstein, there appears to be the votes to invalidate DOMA.  Given our confidence in Tom Goldstein’s analysis, we provide our own analysis how the demise of DOMA would affect immigration law.

First, DOMA prohibits the federal government from recognizing same-sex marriages legally performed in U.S. states.  Currently, there are nine states, Massachusetts, Connecticut, Vermont, New Hampshire, Maine, New York, Iowa, Maryland, Washington and the District of Columbia, that allow same-sex couples to get married.  Presumably some of those marriages would be between an American citizen and a foreign national.  However, while an American citizen can file an immigrant petition on behalf of their foreign national opposite-sex spouse, DOMA prevents the approval of an immigrant petition by an American citizen in a same-sex marriage.  Although the marriage between the two men or two women is perfectly legal in the state in which it was performed, DOMA relieves the federal government from recognizing that marriage.  Therefore, a U.S. citizen can not sponsor their foreign same-sex spouse for residence.

The inability of a U.S. citizen to sponsor their foreign spouse has led many binational couples to pursue very unconventional solutions to live together in the U.S. We have seen individuals take the long, difficult and expensive route to seek their residence because the simple path is foreclosed.  In addition, we have seen adoptions between partners, the establishment of businesses to bring their spouse-employee to the U.S., and desperate resort to fake marriages.  When a law causes good people to break the law, there is often something wrong with the law.  If DOMA is struck down, a U.S. citizen could file an immigrant petition on behalf of their same-sex spouse and have the same expectation of approval as a heterosexual couple has.

Second, same-sex spouses could serve as “qualifying relatives” for relief from removal.  Foreign nationals facing removal often can seek to avoid removal by applying for relief from removal.  Many of these forms of relief require a demonstration of hardship to a U.S. citizen or permanent resident spouse.  In the past, one member of a same sex couple could face removal and not be eligible to apply for relief due to the absence of a spouse, regardless of how long that individual were in a relationship with an American of the same sex.

Third, it may help multinational corporations transfer employees more easily.  U.S. law provides for temporary visa for foreign employees needed in the U.S.  Spouses and children of the foreign employee are entitled to derivative visas.  However, same-sex spouses do not get the same benefit and key employees do refuse transfer to the U.S. due to the inability of their same-sex spouse to join them.  DOMA’s prohibitions deprive U.S. business of workers they have determined they need.

DOMA’s demise would be a very good thing for the development of immigration law.  The pernicious effect of DOMA on the lives of thousands of Americans and their partners/ spouses has led Immigration Equality, the nation’s leading LGBT immigrant rights organization, to file suit on behalf of five gay binational couples challenging DOMA in the immigration context.  Those cases are on hold pending the Supreme Court’s decision in Windsor.  We are hopeful that the Supreme Court makes the Immigration Equality suits moot.

One thought on “How would a Supreme Court ruling striking down DOMA affect immigration?”