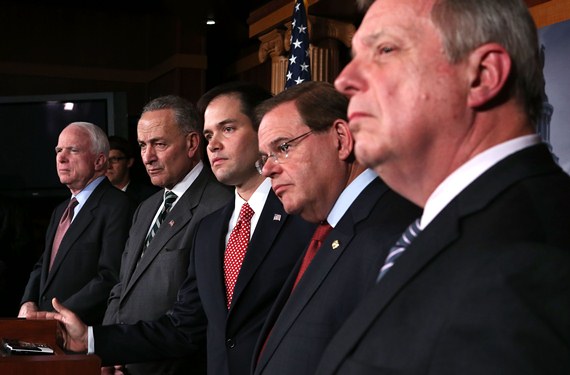 The week before last, we surveyed President Obama’s plan for comprehensive immigration reform. Today, we will look at a similar plan put forward by a bipartisan group of Senators known as the “Gang of Eight.” (Its members are Democrats Charles Schumer, Dick Durbin, Robert Menendez, and Michael Bennet, and Republicans John McCain, Lindsey Graham, Marco Rubio, and Jeff Flake.)

Like President Obama, the Senators want to modernize the legal immigration system, create a pathway to citizenship for the undocumented, and require mandatory employment verification for new workers. Unlike President Obama, however, the Senators have not called for same-sex marriages to be recognized under the immigration laws, and would make the pathway to citizenship conditional on meeting as-yet-undetermined enforcement targets. For these and other reasons, the Gang of Eight framework is less immigrant-friendly than the plan outlined by President Obama.

Like President Obama’s plan, the Gang of Eight framework would create a path to citizenship for most of the 11 million undocumented immigrants now living in the United States. To qualify, undocumented residents would first have to pass a background check and pay a fine and any outstanding taxes. They would then receive “probationary legal status” allowing them to work and freely travel to and from the country, but not entitling them to receive any public benefits not currently afforded to temporary nonimmigrants. Eventually, those with probationary status could apply for permanent residency (i.e. a green card) and U.S. citizenship.

Unlike President Obama’s plan, however, the Senate framework makes the availability of this pathway contingent on meeting a series of (yet to be determined) enforcement measures. For example, the plan would require the completion of an entry-exit tracking system for all temporary immigrants arriving by air and sea. This seems to be a particularly unfeasible requirement. The entry-exit tracking system was mandated in the Illegal Immigration Reform and Immigrant Responsibility Act of 1996 but for budgetary reasons has never been implemented. In an era of fiscal austerity, the entry-exit system may never become completely functional—raising concerns that the Senate proposal contains mileposts that can not be met, undermining the path to citizenship.

The Senate plan would also increase the staffing and technology available to the Border Patrol, and create a commission of politicians and community leaders in the Southwest to make a recommendation on when the border was “secure.” (For a perspective from officials on the ground in busy ports on the Southwest border, read this New York Times Op-Ed by El Paso Judge Veronica Escobar.) Only once these (and potentially other) measures were in place would noncitizens in probationary status be permitted to apply for green card. Moreover, no green cards would be issued to individuals in probationary status until permanent residency is granted to all persons with petitions pending at the time of the bill’s enactment.

The only noncitizens who would be exempt from these “triggers” are: (1) those who initially entered the country as minors, and (2) agricultural workers. Although the framework does not contain precise details, the former would likely be able to obtain permanent residency along the lines proposed in the DREAM Act (i.e. after spending time in college or the military), and agricultural workers would be placed on a separate pathway altogether.

Also like the President’s plan, the Gang of Eight framework calls for improvements to the existing immigration system. Although short on specifics, the Senators’ plan does include two concrete ideas. First, the Senators call for reducing the mind-bogglingly long backlogs in the family and employment visa categories so that future noncitizens do not feel compelled to come or stay illegally. Second, the Senators call for the awarding of green cards noncitizens who have received either a PhD or Master’s degree in science, technology, engineering, or math—or what are colloquially referred to as “STEM visas.”

Although seemingly noncontroversial, these proposals carry potential for legislative gridlock. For example, disagreement could well arise over the number of green cards allocated for the family- and employment-based systems. Marco Rubio in particular has called for an increase in the percentage of visas awarded on the basis of skills rather than family connections. Groups representing U.S. engineers could also call for tight quotas on the number of STEM visas or insist that they be awarded only to PhD rather than Master’s graduates. Finally, unlike President Obama’s plan, the Gang of Eight framework makes no mention of whether same-sex marriages should be recognized under the immigration laws—as President Obama has proposed—and Sen. McCain has said that extending immigration privileges to LGBT relationship could derail the entire effort.

Like President Obama, the Gang of Eight plan would also require the mandatory phase-in of “E-Verify,” the system that most employers can now use on a voluntary basis to determine whether new hires are authorized to work in the United States. (E-Verify is now mandatory only for federal contractors and for private employers in four states, including Arizona.) While not specifically mentioning the creation of a national ID card, the framework says prospective workers should have to demonstrate eligibility through “non-forgeable electronic means”—suggesting that lawmakers would either require the creation of a new biometric ID card or a revamped, tamper-proof Social Security card.

Notably, unlike the President’s plan, which calls for E-Verify to be made mandatory within five years and would create exemptions for some small businesses, the Senate framework contains no timeline and mentions no such exemptions. The Gang of Eight proposal also calls for “procedural safeguards” and “due process protections” to ensure that authorized workers are not mistakenly identified as ineligible for employment.

Finally, the Senators’ proposal calls for the creation of a large guest worker program for “lower-skilled” immigrants. While few details are mentioned, employers would first have to demonstrate that they unsuccessfully tried to recruit U.S. workers to fill the position, and the overall quota would fluctuate based on whether the economy was creating jobs. Also, while the framework refers specifically to the needs of the agricultural industry, the program would likely extend to other industries as well. There currently is such a program in place, but most employers find it riddled with inefficiency and delay.  Any new guest worker program must be responsive to the needs of business and the guest workers so that employers are willing to use the program. Finally, the Gang of Eight framework would allow guest workers who have “contributed to their communities over many years” to eventually obtain green cards.

Again, although seemingly noncontroversial, the creation of a guest worker program could prove to be the most difficult obstacle for lawmakers to overcome. Indeed, the 2007 immigration reform bill ultimately died over an amendment that would have terminated a guest-worker program after five years. Thus far, key sticking points between business and labor relate to how the annual quotas for guest workers would be set and the labor rights that employees would possess while in the country. Fortunately, reports are emerging that labor and business are nearing agreement on the details of a guest worker program—which, if true, would be instrumental in pushing immigration reform over the finish line in 2013.

3 thoughts on “Immigration Reform 2013: The Gang of Eight Plan”