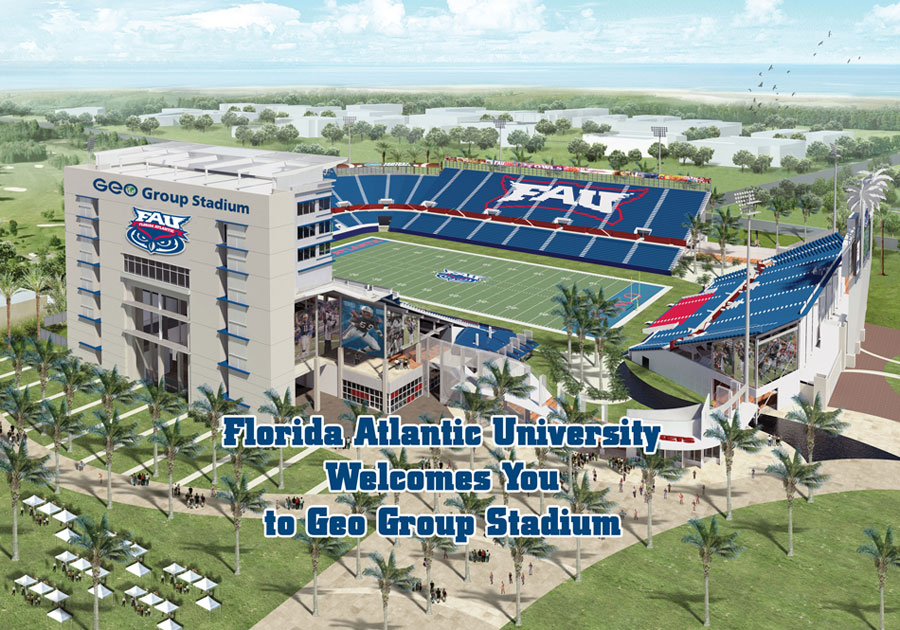 Yesterday, after receiving a gift of $6 million, Florida Atlantic University announced that it was renaming its stadium “The Geo Group Stadium,” after the for-profit prison company, best known for operating detention facilities on behalf of Immigration & Customs Enforcement.  It is remarkable that any university would name a stadium after a prison company, but simply stunning that Florida Atlantic University, which sits in South Florida, a community that has been decimated by the overuse of civil immigration, would be so tone deaf as to think this was a good idea.  Although $6 million can certainly affect one’s “hearing,” FAU’s renaming of its stadium displays a failure of a university’s most cherished obligation, to empower students to make intelligent, ethical and moral decisions in a complex world.

FAU is a public school with over 30,000 students and boasts that 44% of its students are “minority or international students.”  Twenty-three percent of FAU students identify as “Asian” or Latino.”  And FAU sits in Southern Florida, where GEO operates a notorious link in the immigration gulag, the Broward Transitional Center, in FAU’s hometown of Boca Raton.

Universities have long been at the forefront on civil and human rights issues.  Universities nurtured the civil rights movement, the women’s and gay liberation efforts.  Universities divested from South Africa during apartheid and universities have led the charges against foreign sweatshops that made apparel sold in college bookstores.  And it is no surprise that universities have been actively involved in the immigrant rights movement.  Leading educators have stood up for the DREAM Act, have supported efforts to get individuals out of detention and deportation proceedings, and have led urgency to the need for a better system for employment-based immigration.  So, why would FAU accept a donation and so prominently highlight a company who makes it profits off the maintenance of an immigration detention apparatus that is morally dubious if not downright repugnant?

The GEO Group operates 73,000 “beds,” but it is not the Best Western.  “Beds” is corrections-speak for “places where detainees can try to sleep.”  It has a ignominious track record.  Before they were GEO, they were they were the Wackenhut Correctional Corporation.  British journalist Greg Palast wrote of Wackenhut’s operation of private prisons in New Mexico, “New Mexico’s privately operated prisons are filled with America’s impoverished, violent outcasts — and those are the guards.”  The Wackenhut name was so tarnished with scandal that the board changed the name in 2003.   Yet, transforming the way that they did business was much more elusive. Some of GEO’s greatest hits include:

In addition, the GEO groups lobbies for punitive immigration laws and resists efforts to introduce more discretion for judges to release detained individuals.  After all, the trough must be refilled.  It has a very cozy relationship with ICE.  Just last week, we learned that a former ICE bureaucrat David Venturella, who had some ambitious ideas about pumping up removal numbers, has left ICE for his payday at GEO.  The revolving door between government and for profit incarceration is quite lucrative for ICE bureaucrats, but there is no such door for detainees.

It is simply stunning that a university would agree to name a stadium after this behemoth.  It is especially galling in South Florida, where brave immigrant activists Marco Saavedra and Viridiana Martinez infiltrated the Broward Transitional Center to document abuses and conditions.  Would FAU name their stadium after the Bushmaster assault rifle? Or after Phillip Morris (rebranded as Altria)?  No university in their right mind would ever be associated with such corporate pariahs.  The goal for immigrants rights communities is to make the name of GEO as toxic as those names.  The devastating impact that GEO has had on the immigrant community in South Florida simply makes it an unacceptable choice for naming rights at a stadium.  Especially one in South Florida.  FAU must know that GEO is as much a pariah as gun manufacturers and cigarette pushers.  How many FAU students have been detained by GEO?  How many FAU student’s parents and loved ones languished in GEO’s dungeons?  How many kids never got a chance to attend a football game because GEO got them first?

Dream Activist has started a petition.  Please sign.  Please share on all your networks.  While FAU may be intoxicated with GEO’s money, they need to be reminded that their community or “customers” reject GEO’s profiteering on detention misery.