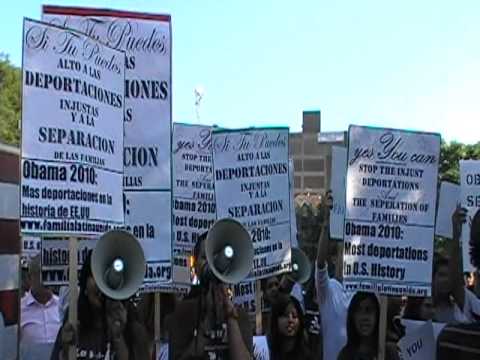 A persistent and fair criticism of the current administration is that while it has made grand pronouncements of focusing its enforcement efforts on violent criminals and threats to the national security, programs like 287(g) and Secure Communities have scooped far more benign immigrants in their overboard nets.  While the administration has put forward numerous memoranda and made extensive public statements about focusing limited resources on the dangerous and the recidivist immigration violators, the reality has been that, as a result of Secure Communities, immigrants without status and without serious criminal issues encountered by the police either due to a minor offense, while reporting a crime, or while the police look for another individual have been swept into the immigration dragnet, detained and deported.  According to ICE, the government deported over 400,000 people last year and most of them were not “the worst of the worst.”

This practice is due to the combination of two practices.  The first is Secure Communities.  This is the cooperative program between local law enforcement and ICE that checks arrestees (not convicts) against ICE databases.  As a result many individuals stopped for minor offenses, such as driving without a license, are arrested when ICE can not confirm their lawful status.  Ordinarily, individuals stopped under such circumstances are not arrested.  Once arrested, the second practice kicks in when ICE places a detainer on the individual.  A detainer is a request made by ICE to the local police department to hold an individual for 48 hours beyond when they are due to be released so that ICE may assume custody.  Because people arrested for minor offenses are held for brief periods of time in local jails, a detainer placed by ICE has the effect of keeping them detained by the local police department far longer than they would have been without the detainer.  This is one reason that many police departments have resisted and rejected participation in Secure Communities.  When ICE assumes custody, they initiate removal proceedings against the individual, not due to the arrest, but because of the lack of status.  If the individual can not demonstrate that she is likely to obtain some form of relief from removal, ICE will often detain without bond during removal proceedings.  Thus, through the operation of Secure Communities and detainers, many non-criminal immigrants without status have been identified, detained and deported.  This sad procession has undermined the administration’s claims to be focusing on the worst of the worst.

Into this unhappy scenario comes a new memo from ICE Director John Morton issuing new guidelines for the use of detainers.  The director has been a prolific memo writer.  He has issued guidance about ICE’s enforcement priorities and attempted to force a recalcitrant bureaucracy to use its limited resources more wisely.  He has written memos regarding the increased use of prosecutorial discretion to make intelligent decisions about when not to bring removal proceedings, when to terminate removal proceedings and when to exercise discretion not to remove a removable individual.  These memos and his approach to ICE’s responsibilities have resulted in the ICE bureaucracy’s open rebellion against him.  And the continued presence of “Obama, why are you deporting my mama” articles and signs among immigrant youth show that ICE agents continue to resist the administration’s stated approach to enforcement.  So, here comes another memo.  If followed, the memo should have a significant positive impact as it will reduce the number of low enforcement priority immigrants who come into contact with ICE and are, therefore, not placed into removal proceedings.

The detainer memo instructs ICE to be more judicious in the issuance of detainers.  According to the director, ICE should issue detainers against individuals only where: (1) they have reason to believe that the individual is deportable from the U.S. and (2) one of the following factors is present:

Under these guidelines, detainers should be issued much less frequently than they have been over the past few years.  Individuals stopped for driving without a license, arrested for simple marijuana possession, disorderly conduct, underage drinking, petit theft, or other minor offenses should not come to the attention of ICE.  By keeping the immigration detention facilities and the immigration courts free from these low priority individuals, ICE remains free to concentrate on those who present serious public safety and national security risks.  In addition, it has the potential to stop or slow the removal of parents, children, brothers and sisters who are good members of their community except for a momentary and unfortunate interaction with law enforcement.  Properly implemented, the new detainer policy has the potential to drastically reduce the removals of low priority immigrants that have sullied the pro immigrant credentials of this administration.

However, as before, there is a battle going on between the stated desires of the political leadership of ICE and the ICE bureaucracy.  The ICE bureaucracy has proven itself extraordinarily adept at undermining its political leadership and has been in open revolt against the administration for the better part of four years.  Like every other memo and political effort announced by this administration, the challenge will remain in whether they can force an unwilling bureaucracy to yield to the wishes of its civilian leadership.  Lincoln had to fire McClellan, Truman had to fire McArthur and Obama fired McChrystal.  We are not sure who in ICE needs to be fired, but, one way or another, this power struggle will need to be resolved.