One of the most pivotal moments in the 2012 campaign was when former Massachusetts governor Mitt Romney attacked Texas governor Rick Perry for being soft on immigration. More than his famous “oops” moment, this moment doomed the campaign of Governor Perry. Perry never recovered from the sustained attack on him that occurred after the governor challenged GOP orthodoxy regarding the availability of in-state tuition for undocumented immigrants. Perry had signed the so called Texas Dream Act, which allows undocumented Texas residents to attend state institutions at tuition levels commensurate with their documented classmates. Despite Perry’s extreme conservative positions on everything else, this minor expression of compassion for the undocumented residents of his state ended the Tea Party’s romance with the Texas governor.

On this page, we have long argued that one of the motivating factors behind the emergence, and now, destruction of the Tea Party was antipathy towards undocumented immigrants. Tea Party politicians have long supported the “business death penalty,” as enacted in statutes like Arizona’s SB 1070, that would revoke business licenses from employers who were found to have employed undocumented immigrants. In addition, mandatory use of E-verify has been a staple of the GOP orthodoxy this year. The Tea Party’s antipathy to what they see as burdensome government regulation never trumped their effort to force employers to enforce federal immigration law and to provide draconian repercussions for their failure to engage in proper record-keeping. The Tea Party’s love of liberty also never stopped them from arguing that the government should deport over 12 million undocumented immigrants. The massive increase in the police authority that mass deportations would require hardly squares with the Don’t Tread on Me ethos the Tea Party claimed to represent. 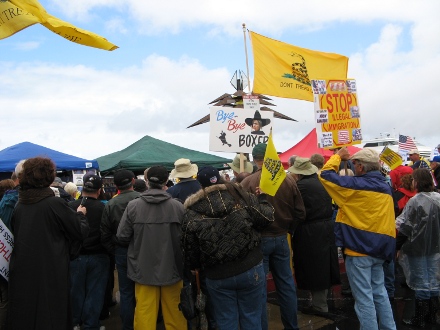 Romney’s attack on Perry had the desired effect. Perry was gone within a month. But, it confined Romney in a box from which he never escaped. Romney brought in the anti-immigrant Kris Kobach as an adviser on immigration policy, he endorsed the Arizona and all the copycat laws, and he famously espoused the concept of self-deportation, the policy of making life in America so miserable for undocumented immigrants that they would voluntarily return.

Meanwhile, the President was having his own troubles with immigration. Latinos, who supported him strongly in 2008, were angry that the President who promised immigration reform had failed to deliver it and had presided over the most efficient deportation programs in history. With over a million removed during his four years, the President has “enforced the law” far more zealously than any of his predecessors. In addition, the DREAM Act failed in the Senate in 2010 with five Democrats joining nearly all the Republicans in killing the bill. Interestingly, Senator Lisa Murkowski, an independent who had been jettisoned by the Tea Party wing of the GOP in her native Alaska but returned to the Senate as an independent, voted for the bill, showing what reasonable Republicans can do when liberated from the Tea Party. The President’s failure on immigration led to a decided lack of enthusiasm among the Latinos who were responsible for the President’s election in 2008 and the Democrats maintenance of control of the Senate.

Perceptive Republicans saw their opening. Senator Marco Rubio began talking about reviving the DREAM Act, but with Republican modifications. Rubio teased and tantalized the country with his talk of introducing a new DREAM Act. He claimed to be in secret talks with members of the GOP caucus, but it became clear that he could not get any support from his own party. Republican stalwarts like Richard Lugar, a DREAM Act supporter, were facing serious Tea Party challengers. In fact, Lugar would be cashiered by the Indiana Republican party in favor of Richard Mourdock, who went down in defeat on Tuesday. However, Rubio’s tease drew some interest from the Latino community. Although the White House opposed the Rubio DREAM Act proposal (there never was a bill), because there was no path to residence, DREAM Act supporters reached out to Rubio. With Latino organizations and immigrant rights advocates considering supporting the Rubio alternative, the White House knew it had to act.

On June 15, 2012, the administration made the move that would win the election. It announced deferred action for childhood arrivals (DACA). The immense popularity of this program became obvious very quickly. When people could finally apply for DACA on August 15, thousands of people flocked to community events to learn about the benefits. As the first approvals trickled out in late September, thousands of young people received work permits and had hope for the first time in their lives. Republicans denounced the plan, some ICE bureaucrats filed suit against the plan, but it was clear that the Latino community had returned to President Obama. Mitt Romney vowed to cancel the plan and failed to appreciate the demographic shifts and the cumulative weight of the Republican assault on the Latino community.

On Tuesday, the full weight of years of Republican demonization of immigrants came crashing down on Mitt Romney as he attracted only 27% of the Latino vote.

In our next post, we will discuss the prospect of real and substantive immigration reform in the next two years.