This is the second in our series where we introduce you to the human beings who staff our office and work on cases.  Today, we profile paralegal Liana Montecinos. 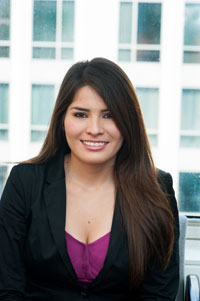 Liana Montecinos never stops.  When she packs up at the end of the day at work, Liana is either going to soccer practice, LSAT classes or to a community meeting.  Liana has many goals and little time, so she is always on the go.  Her life revolves around helping people and social justice.  This is what makes her such an important member of the Benach Collopy team.  Liana has a passion for working with her community, the Latino community in Northern Virginia, that comes from her own experience as a young girl recently immigrated from Honduras.

Liana came to the U.S. as an eleven year old girl from Honduras.  After her beloved grandmother died in a car accident, Liana joined her mother in Virginia.  They settled in a rough part of town where many kids gravitated to gangs and teenage pregnancy.  Liana learned quickly that those routes were dead ends and threw herself into school and activities.  She would go to school when it opened at 7 AM and stay well past dark.  She played soccer and volleyball.  She joined clubs and founded her own, establishing a non-profit organization, United For Social Justice, which seeks to steer immigrant youth to positive activities such as academics, arts and sports.  She created a soccer team for at-risk youth.  Liana won a private scholarship to George Mason, where, characteristically, she sped through a four year degree in no time.

Liana once was Benach’s client.  One of the original DREAMers, Liana’s outspoken efforts to combat gangs and hopelessness made her a potential target for retribution in her native Honduras. As Benach Collopy opened its doors, we were treated to the happy news that Liana got her permanent residence.  As usual, Liana is trying to figure out how to make the five years before she can apply for citizenship go faster.

After graduating, Liana took a position with the Capital Area Immigrant Rights Coalition (CAIR) where she worked on programs for unaccompanied minors who fled violence and abuse in their home countries in search of refuge and opportunity in America.  When these kids met Liana, they saw all that was possible here.  Liana’s own story provides them with hope as a role model.

Liana has taken a lead role in Benach Collopy’s work for DREAMers and has become a surrogate mother to our DACA clients as she helps them gather their documents, answers their questions and encourages them through the process.  To Liana, this work is just like everything else in her life: a chance to help her community and to spread hope where too often it is fleeting.

Liana is studying for the LSAT and preparing to go to law school.  We know that she will be a great attorney soon and Benach Collopy is committed to making sure it is with us!